What Britain thinks: Comparing views across London and other regions

of Londoners engaged in politics

Only 40% of Londoners living comfortably

of Scots fall on left of political spectrum

The report shows that despite different demographic profiles with respect to age, ethnicity and country of birth, Londoners’ attitudes were closely aligned with Scots on a number of issues. However, there are differences when it comes to issues such as sexual norms.

Londoners and Scots are pro-welfare

The report shows that Londoners and Scots are both substantially more likely to fall on the pro-welfare end of the welfare scale (41% and 43%, respectively vs 16-29% in the South, North and Wales), less likely to think that unemployment benefits are too high (38% and 43% respectively vs 48-54%) and most inclined to sympathise with benefit claimants (42% vs 28-38%). Those on the anti-welfare end of the scale comprised a small proportion of all regions, with the smallest proportion in London (6% vs 12-14% in other regions).

Londoners (45%) and Scots (54%) are more likely to want the government to encourage people to take up benefits they are entitled to rather than work to stop benefit fraud (30-36% in other regions).

Londoners least happy with their incomes

The higher rates of sympathy with benefit claimants, in London at least, might be because Londoners are feeling the impact of high living costs. Londoners were significantly less likely than those in other regions to report that they felt they were living comfortably on their current income (44% compared with 53-56% in other regions).

Londoners and Scots most political

Over half (51%) of Londoners and 48% of Scots are more engaged in politics than people in the regions and Wales (35-48%). However, whereas Londoners have always shown more interest in politics, Scotland’s current high level is a more recent development and marks a 26% jump from 2011.

The findings also show that although there are substantial numbers of people on the left of the political spectrum across Britain, more Londoners (58%) and Scots (60%) fall to the left than the Welsh (57%), Northerners (51%) and Southerners (46%).  London and Scotland have also seen a significant increase in the number of left-affiliated individuals since 1998 (London 49% vs 58%, Scotland 56% vs 60%)

Londoners and Scots most liberal

But, Londoners least liberal on sex before marriage

Paradoxically, views on sexuality represent one of the starkest contrasts between Londoners and Scots, with the former giving a much lower level of agreement to the statement that pre-marital sex is rarely or never wrong (73% vs 82%), also lagging behind the Welsh (93%), Southerners (89%) and Northerners (85%).*

Where London and rest of country agree

Yet, the findings also reveal some interesting similarities in attitudes and beliefs between Londoners and the rest of Britain. Most notably, education and work appear to be areas of common ground, with respondents from all regions recommending that young people pursue A-level qualifications (49% London, 37% South, 37% North, 39% Wales, 42% Scotland). This reflects a sharp decline from 2002, when 62% of Londoners said they would do so.

Highlighting changing traditional gender roles across all of Britain, 58% of Londoners disagree that ‘a husband’s job is to earn money, a wife’s job is to look after the home and family’, on par with all other regions (55-61%). When it comes to supporting increases in tax and public spending, Londoners are even more closely aligned with England and Wales than with their Scottish counterparts, (46% London, 43% Wales, 45% South, 50% North, 62% Scotland) – support for tax and spend has increased across Britain, from a low of 31% in 2010 to  49% in 2016. How taxes should be spend on social benefits varies though, with more Londoners supporting an increase in child benefits than people in other regions (24% vs 9-15%) and less likely to favour government spend on retirement pensions. Nevertheless, around one-third of respondents across all regions name disabled benefits as their top social benefits spending priority. 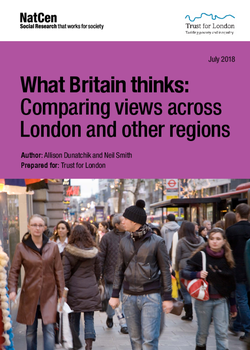 What Britain thinks: Comparing views across London and other regions

EU Settlement Scheme: A new role for the Voluntary Sector

Is there a public consensus on what it means to be rich?

It features all the latest Trust for London news, events, reports and training opportunities. If you’re not already, make sure you’re signed up here: http://bit.ly/2m4yoPb  pic.twitter.com/5iFo6j4K95

Calling all staff, volunteers, groups & individuals working on UK #migration & #refugee support A reminder that we’re looking for your views on the sector for a 2020 review conducted by #MigrationExchange , funders supporting the field Deadline 13 Mar http://bit.ly/2T5pPQG  pic.twitter.com/Fwksi81zzb

In their continuing #MayoralElection series exploring the power held by the @MayorofLondon , @centreforlondon look at the role of the #London Assembly in their latest post

Read more from @MarioWIhieme below