Unhelpful and unfair? The impact of single parent sanctions

of formal sanction challenges by single parents are overturned

Single parents want to work yet Gingerbread’s research shows that sanctions can make it less likely for parents to achieve that goal. This report also shows the first signs that Universal Credit risks making this situation worse, as more single parents – including those with very young children and those who are in work – are subject to conditions that place them at risk of sanctions under the new benefit system.

While a full rethink of the current sanctions system is necessary, Gingerbread calls on urgent action from the government to:

including for parents of three and four year olds until affordable and good quality childcare and flexible work is available locally.

so that they are transparent, flexible and appropriate to single parents’ needs.

Focus on providing support rather than inflicting sanctions

to better enable single parents to enter work such as assisting with upfront childcare costs. 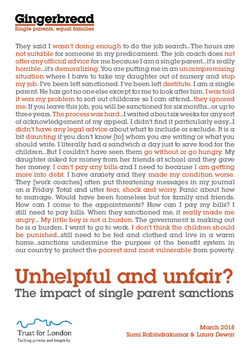 Unhelpful and unfair? The impact of single parent sanctions