New research shows that incomes of the poorest Londoners fell by almost a quarter because of the financial crash, whilst for the wealthiest Londoners financial, physical, and property wealth increased. It also shows that poverty increased in most London neighbourhoods and spread to areas previously considered less poor, particularly those in Outer London.

The research by LSE’s Centre for Analysis of Social Exclusion, funded by Trust for London, is the first to provide a comprehensive picture of which groups of Londoners won and lost during the boom and then the downturn.

London after the crash

London was resilient during the global credit crunch of 2007/8 – surprising given its dependence on the financial sector. Output growth remained strong in 2008 and it was the only region in England where output did not dip in 2009. Between 2006/08 and 2010:

And at a time when qualification levels in the working-age population were rising fast nationally, those in London rose faster. Between 2008-2010 there was a bigger increase in Londoners with degrees (2.6 percentage points compared with 1.5 percentage points in the rest of England) and London’s GCSE results were better, especially for those on free school meals.

London’s relative resilience was set against a backdrop of widening economic inequalities. Falls in household income, after housing costs, were greater in London, with the poorest hit hardest:

Wealth amongst the top tenth of the distribution increased by 8% in London, compared with 0.4% in the rest of the country, meaning that the 90:10 ratio (of rich to poor household wealth) increased from its 2006/8 level of 199 to 215 by 2010. In other words, even excluding the very richest and very poorest 10% of Londoners, the best-off Londoners had 215 times more wealth than those at the bottom.

In addition, compared to poor households elsewhere in England, between 2006/8 and 2008/10, wealth levels amongst the poorest tenth of the London population remained the same, whilst there was a 14% increase for the poorest living in the rest of England.

The overall poverty rate remained stable between 2001 and 2008 but there was a change in the distribution; with poverty falling in the poorest inner-city neighborhoods and increasing in less poor outer areas.

As the economic downturn hit, poverty rates went up in most neighbourhoods, spreading to areas previously considered less poor:

This means that the predicted effects of the Coalition welfare reforms – of poverty moving from Inner to Outer London – were happening even before the reforms started.

Commenting on the research Professor Ruth Lupton, one of the authors of the report, said:

“These findings raise important questions about the state of the UK’s capital city at the time the Coalition Government took power. On the one hand, they are positive, in terms of London’s economy, its labour market, and the qualifications of its inhabitants. Yet economic success does not seem to have translated into lower rates of poverty or inequality.

“The recession, despite its origins in the financial sector, appears to have worsened economic outcomes for those Londoners who were already poor, affecting the better off less.”

“London’s story is pivotal to the UK’s return to economic growth but this growth must not come at the cost of those who have the least. It is shameful that the poorest in the capital lost almost a quarter of their incomes because of the financial crash – widening the chasm between the richest and poorest in the most unequal region of England.

“This rise in poverty and inequality must be addressed. Part of the answer lies in increasing the incomes of the poorest and tackling housing costs; by expanding the supply of affordable housing and more employers adopting the London Living Wage.”

It is part of a wider research programme called Social Policy in a Cold Climate; (SPCC).SPCC is a large programme of independent research designed to document the combined impact of economic and political changes on poverty, inequality and income distribution in the UK between 2007 and 2014, covering the periods of both Labour and Coalition governments. It is funded by the Joseph Rowntree Foundation, Nuffield Foundation and Trust for London and carried out by a team of researchers based mainly at the Centre for Analysis of Social Exclusion at LSE. 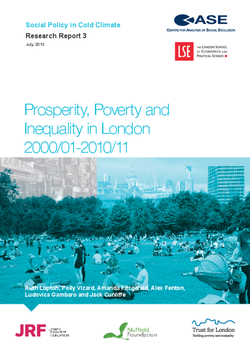