On the rise: single parent sanctions in numbers

single parents a year were referred for a sanction, and one in seven had a sanction imposed

One in seven single parents hit with benefit sanctions. The government is systematically underestimating the risk of sanctions to single parents, according to new research from Gingerbread.

“On the rise: single parent sanctions in numbers” is a major new examination of the government’s ongoing commitment to stringent ‘conditionality’ in the welfare system – the ever tougher standards that claimants of jobseeker’s allowance must satisfy in order to receive benefits.

The risk of sanctions is far higher than the government claims

at its peak, around one in five single parents a year were referred for a sanction, and one in seven had a sanction imposed. [1]

Single parents are at particular risk of unfair sanctions

£40 million has been stopped since new rules came in. [3]

The government defends the sanctions regime as a last resort, only used in a “tiny minority” of cases against those who deliberately refuse to cooperate. [4] Yet in the last decade, around 160,000 single parents have been sanctioned, affecting 250,000 children. And this new evidence suggests that sanctioning is a much more common threat since stricter rules were introduced in 2012. [5]

“Single parents want to work – already two-thirds do. We know through our helpline, however, that single parents increasingly feel punished for being unable to juggle seeking work and looking after their children; this report confirms this is in fact a widespread experience. Parents not only fall foul of an inflexible system, but are also sanctioned for errors made by the DWP itself – with resulting hardships that risk pushing them further from work. The findings are especially troubling since the new benefits system – universal credit – is set to increase the scope of conditionality, with 165,000 single parents of three and four year olds soon to be at risk of being sanctioned if they are not actively seeking work. The new changes will also see the introduction for the first time of ‘in-work conditionality,’ with single parents facing the prospect of sanctions if they don’t work enough hours or earn enough money.”

“These are sobering findings, at a time when the government is dramatically increasing the reach of sanctions through welfare reform. All the evidence suggests that a system that is supposed to help people out of poverty all too often unfairly strips away vital financial support from those who need it most. Unfair sanctions put families under severe strain and waste government resources. The government can no longer afford to put off a proper review of the sanctions system.”

The report was funded by Trust for London.

[3] Under the new regime alone, sanctions have stopped around £40 million in JSA payments to single parents – or around £24 million once hardship payments and repayments of overturned sanctions are taken into account 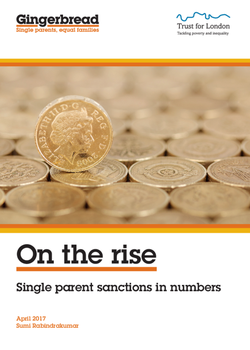 On the rise: single parent sanctions in numbers

Involving Young Londoners: A review of participatory approaches in the youth sector