Out of Pain: Breaking the cycle of physical pain and homelessness

said that pain made it difficult for them to hold down a job.

said that pain had contributed to them becoming homeless.

Over half of homeless people suffer from chronic pain which is often undiagnosed. This finding comes from Groundswell's "Out of Pain" research, a study which looks at the extent, cause and impact of physical pain on people who are experiencing homelessness.

The research employed mixed-methods, including a literature review, focus groups, and one-to-one surveys. Groundswell's findings support the existing literature about the impact of chronic pain on people experiencing homelessness, and indicates that the pain is contributing to people becoming and remaining homeless.

53% of homeless people were found to experiencing at least one long term pain condition, over four times higher than the rate of 12.5% in the general population. This conditions included arthritis (23%), chronic back pain (23%), sciatica (14%) and cluster headaches (12%).

Martin Burrows, Director of Research and Campaigns at Groundswell, said:

Rough sleepers and people living in hostels and temporary accommodation are often dealing with cold, damp or uncomfortable environments, have poor nutrition and are susceptible to violence, all of which exacerbate pain conditions. We also see a clear correlation between people who have had difficult lives – growing up in care, being victims of domestic violence and abuse – and experiencing homelessness in conjunction with chronic pain. It’s a vicious cycle – people experiencing chronic pain are more vulnerable to becoming homeless; homelessness itself can exacerbate the problem and make it harder to access treatment.

There's now growing evidence that some of the most vulnerable people in our communities are being deliberately dissauded from using vital healthcare services as a cost saving exercise. Whether dentists or doctors, early treatment for homeless residents is crucial to improving outcomes. So the research showing how hard it is for them to access services should be a red flag to the Government to act to ensure both parity of treatment and effective use of resources. This research also highlights how poor health and homelessness are interconnected thus further reinforcing the point that treating any resident as second class is not only morally wrong - its also short sighted.

Groundswell are campaigning to increase awareness of this problem, and secure better access to healthcare for people experiencing homelessness. 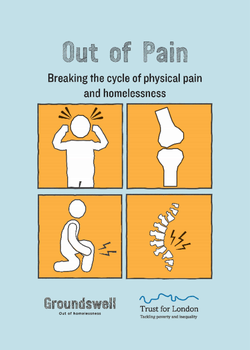 Out of Pain: Breaking the cycle of physical pain and homelessness