employment rates among young black men in London are both longstanding and consistent over time.

of the 744 young black men supported by the initiative had secured employment by November 2016.

Moving on Up Initiative

Moving On Up (MOU) is a special initiative funded by Trust for London and City Bridge Trust, in partnership with the Black Training and Enterprise Group (BTEG). The Social Innovation Partnership (TSIP) is undertaking a process and impact evaluation of the initiative.

The context for the initiative is the low employment rate among young black men in London relative to other ethnic groups, which is both longstanding and consistent over time. MOU aims both to directly increase the employment rate amongst young black men in London through supporting targeted interventions; and to generate learning that could influence mainstream employment support providers and funders/commissioners. Grants were awarded to six organisations: Action West London (formerly Action Acton), Elevation Networks, Hackney CVS, London Youth, Making the Leap and Step Ahead that use a range of different models to support young black men to transition successfully into employment. Work stared in March 2015.

As of November 2016, approximately 223 of the 744 young black men who had been supported by the Initiative, had secured employment. 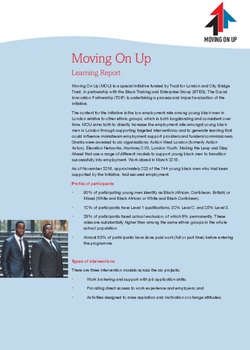 Moving on Up: Improving employment opportunities for young black men