of families with children were worse-off after household costs by 2019 than they were in 2016.

on benefits is preventing some financially vulnerable Londoners from fully benefitting from the April 2020 benefit reforms.

Policy in Practice, supported by Trust for London, has worked with 17 London boroughs to track the living standards of over 750,000 low-income Londoners using administrative data on Housing Benefit and council tax support during the period 2016 to 2020.

Their work finds that between 2016 and 2019, working-age low-income Londoners became increasingly financially vulnerable. There are strong links between households affected by welfare reforms and households who became more financially vulnerable, with groups who were impacted by several reforms, such as families with children, lone parents out of work, and private renters, becoming increasingly likely to face a cash shortfall after costs.

This decline in living standards meant low-income Londoners were ill-prepared for the financial impact of COVID-19. However, April 2020’s welfare reforms - most significantly increases to Universal Credit, tax credits and the LHA rate in response to COVID-19 - offered a boost to most working-age low-income Londoners. As a result, the proportion of low-income households who were financially vulnerable declined significantly - even if some groups did not benefit as much as others, and there are other groups new to benefits who can only be fully understood with more recent data. 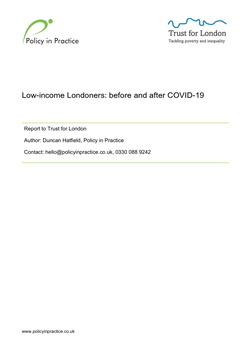