The report also reveals that families with young children have been hit harder than any other household type under the Coalition’s cuts despite early rhetoric highlighting the importance of the “foundation years”. Real spending per child on early education, childcare and Sure Start services fell by a quarter between 2009-10 and 2012-13 and tax-benefit reforms hit families with children under five harder than any other household type.

Its choices to protect very large areas of public spending meant that its austerity programme was more limited in practice than its rhetoric suggested, and that austerity measures were concentrated on particular policy areas. Year-on-year public spending has dropped less than 3 per cent, but cuts of around a third have been made to ‘unprotected’ services, including those for pre-school children under five, vulnerable and older adults needing local authority social care.  In practice, people with health and care needs and children moving from pre-school to university frequently cross the boundary between protected and unprotected services.  Even ‘protected’ areas such as the NHS have faced rising demands on fixed or falling budgets.

These overall conclusions are based on a comprehensive and authoritative analysis of policy, spending, outcomes, and trends across nine different areas of social policy.  Separate reports are available for each, covering reforms as well as spending and highlighting challenges for an incoming government.  They provide detailed facts and analysis to underpin the debates running up to the general election in May. 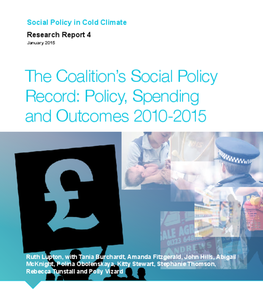 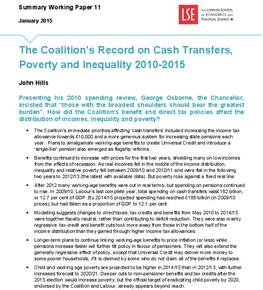