levels of living standards were identified, from the minimum income standard to the super rich.

wealth was difficult to reach a consensus on.

around the deserving and undeserving rich were explored.

Centre on Household Assets & Savings Management at University of Birmingham

There is widespread public and political concern about economic inequality in the UK today but relatively little research exploring people’s opinions about high incomes, wealth and what it means to be rich.

This innovative study, commissioned by Trust for London and conducted by academics at Loughborough and Birmingham universities and the London School of Economics (LSE), aimed to explore what members of the public with lower and higher incomes living in London think defines higher living standards and whether there is a point at which financial resources (income and wealth) are excessive or undesirable for society.

London was chosen as the location for the study because economic inequality is particularly pronounced and plainly visible in the capital.

There was a considerable degree of consensus across participants from different income groups. They identified five levels of progressively higher living standards. The levels were not seen as equally spaced. These were:

While the groups in our research were able to find a broad consensus on standards of living well above the minimum, including the wealthy at the top and the super rich at the very top, they found it much harder to identify and agree on a point beyond which greater resources could be considered excessive.

This may reflect people’s current perceptions of precariousness, particularly relating to incomes, employment, housing and health. Wealth was discussed as providing protection against risk and unpredictable changes in circumstances while optimising opportunities and choices. There was little sense that having more would cease to make a noticeable difference at some point, particularly in terms of intangible aspects such as freedom and security. However, people did agree that having great wealth (and often power and influence as well) is a great responsibility and that it is important that those who are more fortunate should be prepared to use at least some of their money for the good of others in society. Understanding these multiple dimensions of attitudes towards wealth and riches is crucial for developing policies that work with the grain of the aspirations and perceptions of members of the general public. 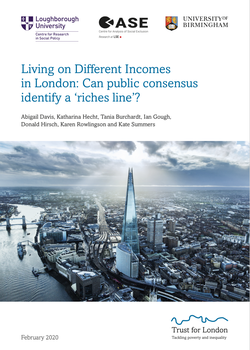 In London, inequalities infect the air we breathe