1 in 7 London Workers Stuck in Low Pay for Over a Year. 570,000 Londoners, equivalent to one in seven London workers, have been stuck in low pay for at least a year, new research has found. The Work in Progress project, commissioned by Trust for London from the Centre for Economic and Social Inclusion, brings together new analysis on low pay and progressionat work.

It finds that around one third of low-paid workers see their wages increase by less than the national average, pointing to challenges with Universal Credit as its successful implementation depends on over a million low-paid workers increasing their earnings. Other key findings include:

There is emerging evidence of what works in improving pay and progression:

Recommendations from the report include: 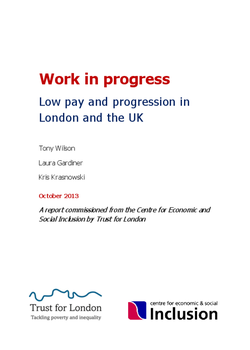