times of transition and ill health are moments working-class people are most vulnerable, as they lack financial safety

Centre for Labour and Social Studies

This report is the result of a year-long qualitative research project and collaboration between Runnymede and CLASS. Conducted over 2018, interviews and focus groups with 78 people highlighted an increasingly punitive culture of services experienced across working-class, BME and migrant communities. Rather than the ‘white working class’ and ‘ethnic or migrant working class’ living different or separate lives, the researchers found significant overlap in everyday lived experiences, which was analysed using a ‘4P’ framework: power, precariousness, place and prejudice.

A set of shared conditions shaped the experience of working-class people across all ages and ethnic groups:

Interviewees’ local neighbourhoods were a main point of reference when discussing race and class dynamics: Ladbroke Grove and the Mangrove, the New Cross fire, and the Brixton uprisings would inform the conversations. Most interviewees displayed a great deal of pride in and commitment to their community, describing local values of solidarity and camaraderie as an integral part of their identity.

Despite this set of shared conditions, class was discussed with much ambivalence and confusion by interviewees. The question: ‘Would you call yourself working class?’ was a source of contention and debate. Older, male and white interviewees were usually the most confident in asserting their working-class identity, while other interviewees were more likely to be indifferent towards the term, to perceive it as only applying to white British people, or to reject it as a stigmatizing caricature.

Rebuild the safety net, at work and through public services

Rather than a strong sense of ‘working class’ identity, what came out more concretely through focus groups was when and where interviewees’ backgrounds were experienced as resulting in a lack of ‘safety net’, particularly in times of transition, ill health and crisis. It was in those moments that working-class people were most vulnerable, as they lacked financial safety, institutional support and networks in comparison with more privileged peers. This was accentuated by general housing precariousness: without medium to long term stability of housing, interviewees found it more difficult to access local services effectively, and to develop and tap into formal and informal networks of personal support.

The changing face of contemporary work was a factor in blurring the lines of working class affiliation. Traditionally, work has been the anchor for working-class identity. However, with the growth of the gig economy, work has become more precarious and atomized. As new forms of low-income work do not provide the same sense of identity and common cause for mobilization, ‘working class’ as a badge of honour seems to have lost its resonance for many people.

The lived reality of being working class in London was typified by a shared experience of indifference and neglect from the state and public authorities. Interactions with local councils were often experienced as discriminatory, or complacent about residents’ needs and difficulties. As a result, people were deterred from trusting and seeking to access statutory services, and relied instead on local networks and friends when facing injustice and hardship. Despite the proven benefits of strong communities, many interviewees expressed frustration at the lack of recognition for their efforts and contributions locally, within communities that are chronically underresourced, overstretched and dispersed by cuts to services.

Most interviewees reported experiencing daily encounters with public services as punitive and disempowering – whether this was with the police, job centres or social services – to the extent that many discerned an active conflict of interest between services’ targets on the one hand and the wellbeing of working-class families on the other. Many interviewees talked about dehumanisation (‘They don’t see you as a person’/’They don’t treat you as a human being’). They also highlighted how racism or xenophobia exacerbated their ill-treatment. Wider public narratives around who is ‘deserving’ and who is ‘undeserving’ and the impact of the ‘hostile environment’ made engaging with public services an even more dispiriting experience. The gap between professional intervention and the intuitive knowledge of and challenges faced by communities was also experienced as a great barrier to trust and engagement.

A shared impression that local services and support have been designed to be out of reach further entrenches poor esteem of and confidence in services. The current experience of local services cements the belief that the levers of justice are not working for working-class people, and that their rights are ultimately unenforceable. As a result, people step away from support, often out of exhaustion and disillusionment with the support on offer and the way in which it is – or is not – provided. Services become another obstacle to navigate on top of other life stresses. 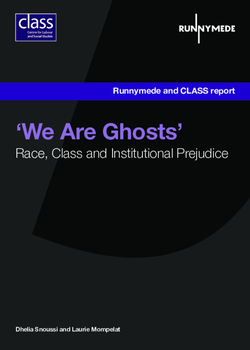