Better Work
At least 2 million workers in Britain are losing over £3 billion in unpaid holiday pay and wages a year, say Middlesex University London researchers, in the final Unpaid Britain report released on November 30th and funded by Trust for London. According to the report not paying wages, withholding holiday pay or workers “losing” a couple of hours’ money a week are some of the methods employers are using in a deliberate strategy to boost their profits.

The research team, led by Nick Clark from Middlesex University, analysed employment tribunal judgement data, Labour Force and Family Resource surveys, case studies and interviews to reveal a Britain where millions of workers are systematically losing out on wages while employers rarely face penalties. Furthermore consequences for non-payment are so weak that they do not present a sufficient deterrent to employers with many continuing to reoffend.

Employers use a number of regular and systematic tactics to withhold money from workers, including:

·      Employers disappearing while owing wages (known as “knocking” in the construction industry).

·      Employers dissolving a company which owes wages in order to start up afresh with a new company (“phoenixing”).

·      Dispute over the interpretation of contracts, for example the payment of travelling time for care workers.

·      Building up arrears in pay keeping workers in place when they might otherwise move on to other jobs, so the practice is effectively labour hoarding.

·      Charging workers for uniforms or other necessary items in order to be able to perform their duties.

·      Making HMRC responsible for paying workers identified NMW arrears, and then collecting them from the employer.

·      Developing systems for informing student workers of their rights, and assisting them in their enforcement.

·      Requiring employers to deposit a financial bond or take out insurance to guarantee workers’ wages.

·      Stronger sanctions against directors  considered to have deliberately failed to pay

·      Empower unions to take up cases on behalf of groups of workers (for example challenging sham self-employed contracts).

of wages are unpaid each year

of holiday pay is unpaid each year 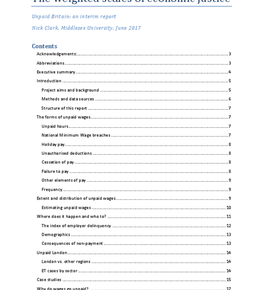 Why do ministers do nothing about bosses who steal from the low-paid?