Tough Gig – Low paid self-employment in London and the UK

of UK self-employed are in low pay on an hourly basis, compared with just 22% of UK employees

workers are self employed in the UK, a proportion that has grown by a quarter since 2000

New research, released today by the Social Market Foundation (SMF) think-tank, warns that 1.73 million workers will continue to be paid below the National Living Wage (NLW) when it comes into force in April 2016 because it does not cover the self-employed. By 2020, the NLW is expected to rise further, resulting in the number of self-employed workers paid below the new rate rising to 1.88 million.

The SMF report – funded by independent charity Trust for London – raises concerns that, as the new higher NLW comes in, there is an added incentive for firms to move away from directly employing workers towards contracting out services to self-employed individuals, as self-employed workers are not covered by the NLW.

Self-employment is a growing part of the employment landscape. It now accounts for over 1 in 7 of workers in the UK, a proportion that has grown by a quarter since 2000.

London has the highest rate of self-employment of all UK regions, with the self-employed accounting for 18% of all workers. Growth in self-employment in London was responsible for much of the jobs recovery after the last recession.

However, Low paid self-employment in London and the UK reveals that just over half of London’s self-employed are in low monthly pay (52% or 319,000 people in 2010-11*) – a similar proportion to the rest of the UK. If London has followed the UK-level trend in more recent years it is likely this figure will have now increased to around 55%.

The research suggests that the higher cost of living in London presents a particular problem for the self-employed. The SMF show that two-thirds (67%) of self-employed Londoners earned less than the equivalent of a full-time employee on the London Living Wage – which stood at just over £15,000 in 2011*.

The research also reveals that, across the UK, low paid self-employed workers are more likely (28% or around 600,000 people) to live in low income households than their low paid employee counterparts (19%).

Research highlights that, across the UK, growth in self-employment has been particularly stark among older people. This may potentially reflect changes to work and retirement patters, with older people choosing to stay in work for longer. However, the pattern of older people going into self-employment is less marked in London. This means that London’s low-paid self-employed are less likely to have pension income to rely on to supplement their earnings.

In terms of gender, men account for 72% of London’s self-employed and 67% of the low paid self-employed. Despite this, women are disproportionately likely to be in low pay. The SMF find this is a picture which also plays out on the national level.

“The government has focussed its efforts on tackling low pay among employees. But in doing so, it is further sharpening the divide between employee and self-employed. Policies such as the National Living Wage make it artificially more attractive for firms to engage contractors rather than employees, and ignore a large section of low paid workers. Policymakers need to adapt to a world that is moving away from the traditional employer-employee model of working.”

“There’s a common assumption that people enter self-employment because they can afford to, as it is offset by other earnings including those from family members. This research finds that those in low-paid self-employment are 50% more likely to be living in a low-income household than low-paid employees and that their income from other sources such as savings is lower. In London the self-employed have accounted for much of the jobs growth in recent years but it appears this has come at the cost of increased low pay. Stronger measures are needed to tackle this including specific sector support and examining the role of contractors in increasing the wage floor.”

Mubin Haq, Director of Policy & Grants at Trust for London 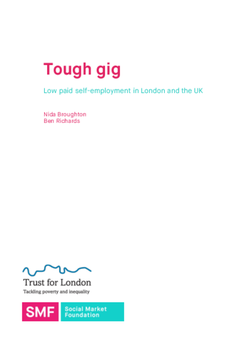 Tough Gig – Low paid self-employment in London and the UK