frontline professionals (those with a legal duty to identify, report and respond to FGM) received training delivered by the TFGMI organisations

of those who were engaged were women

UK Communities affected by FGM ‘transforming attitudes’ to the practice.

Local funding is key to government ambitions to end FGM in the UK and the future health of thousands of British girls and young women, a landmark report by the Tackling FGM Initiative (TFGMI) warns today.

The £2.8 million initiative (TFGMI) today hails the success of community-led approaches to prevent FGM and support local organisations; but says that lack of local investment is a major threat to the health of women and girls in affected communities and the Government’s efforts to end FGM in the UK.

The evaluation report marks the end of a six year programme working in almost 20 local authorities across the UK to chart and develop community-led interventions to tackle FGM. The report shows how community based organisations have:

Transformed attitudes amongst many affected communities

including teachers (52% of total trained), health professionals (13%), social workers (7%) and GPs (5%) – with statutory responsibilities to safeguard girls and support women.

Worked alongside local safeguarding agencies to connect with communities

is illegal and has severe health implications has led to an attitudinal change and a decreasing number of people in affected communities who see FGM as an important ‘cultural artefact’.

The final evaluation report, one in a series of reports produced by the TFGMI since 2010, says:

“There is good evidence that the community based approach has worked with a range of audiences within communities affected by FGM and has started to create a critical mass of people who are opposed to the practice.”

“The major barrier to the future of the ending FGM campaign is still funding. Even in areas where local authorities, public health colleagues, police and others highly valued TFGMI-partners, when asked about future funding intentions it was not evident that funding needs had even been considered. This may be because of the lack of clarity on where FGM ‘sits’ and who should be funding [FGM work] (local authorities, Health and Well-being Boards, public health or clinical commissioning groups), as well as the impact of the cuts of local budgets.”

It says that lack of training and availability of specialist social workers – even in areas believed to have high prevalence of FGM – is of concern to many community organisations and warns that the role of community groups in promoting a broader understanding of child protection is still often under estimated. This could lead to heavy handed responses by frontline professionals.

The TFGMI was funded by: Rosa, the UK Fund for Women and Girls; the Esmée Fairbairn Foundation; Trust for London; Comic Relief; and Kering Corporate Foundation. Its final evaluation report was launched today, with ‘Communities Tackling FGM in the UK: Best Practice Guide’, at an event hosted by Karen Bradley MP, Minister for Preventing Abuse, Exploitation and Crime. 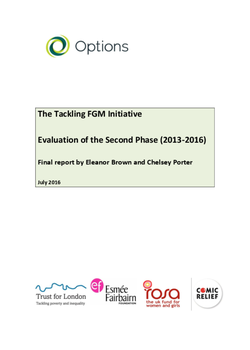