of workers in London are self-employed, in 2019.

could be offered stage-by-stage - from personalised advice to arbitration - entirely digitally without the need to use the courts saving workers time and money.

This report from Fabian Society and funded by Trust for London makes the case for an online dispute resolution (ODR) service for self-employed workers and explores the role such a service could provide.

“This report highlights the challenges faced by low-paid self-employed workers when facing injustice in the workplace. Self-employment makes up nearly a fifth of the capital’s economy and is growing. These workers are often economically vulnerable, with a high proportion having lower than average earnings and few, if any, pension savings. It is vital that self-employed workers have access to justice.”

“The growth of the gig economy and other new forms of self-employment means we need to act now to help the UK’s self-employed workforce secure their rights without having to go to court. The Covid-19 pandemic has laid bare the inadequate protections available to the self-employed. Not only do contract workers have fewer rights, they lack the mechanisms available to employees to ensure they are enforced. This is an issue not just for workers but for the economy as a whole. The Fabian Society is calling on the Justice Secretary to establish an ‘online dispute resolution’ service to address the self-employment justice gap. By stopping disputes escalating, our plan will save workers, businesses and the courts’ time and money, while demonstrating politicians’ commitment to the self-employed.”

The report sets out five key issues limiting access to justice for the low-paid self-employed:

The report outlines key design requirements for an ODR system for self-employed workers and considers the services it should be able to provide. The key stages proposed are: 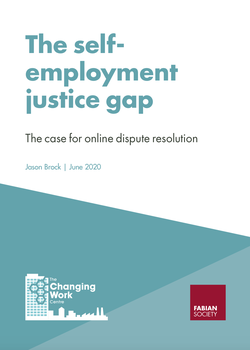