of women were supported after just becoming homeless or threatened with homelessness.

of women were supported regarding move on challenges with local housing authorities.

of women were supported post-move, with preventing unreasonable eviction or help with relocation.

This report addresses the housing experiences of Black and minoritised women survivors of gender violence, drawing on the first year of the Women Against Homelessness and Abuse (WAHA), a two year project funded by Trust for London and jointly run by Latin American Women’s Aid (LAWA) and London Black Women’s Project (LBWP) under the OYA consortium of, by and for Black and minoritised women’s refuges. Both LAWA and LBWP have a longstanding history of 60 plus years working with minoritised women and run refuges and advice centres for women affected by different forms of gender-based violence.

The WAHA project is aimed at addressing Black and minoritised women’s intersecting pressures of poverty, homelessness and gender violence, through promoting changes in housing policy and practice in the UK using a rights-based approach. Hence, it is policy focused, but it is also a frontline project advising women and acting on their behalf to help them access and achieve safe and appropriate accommodation, in an environment free from violence and intimidation. The project also endeavours to build the capacity of professionals, with the goal of ensuring all homeless women are treated fairly and with dignity. WAHA’s ultimate goal is to work with policy-makers and practitioners to effect change in the way the housing needs of vulnerable women are met. They envisage a world where no woman will be forced to endure violence for fear of becoming homeless, and where minoritised women fleeing violence are able to access their right to safe, suitable and stable accommodation without that process furthering the cycle of abuse.

Black and minoritised survivors are faced with complex structural barriers to access safe and stable forms of accommodation. They are often at high risk of homelessness and re-victimisation at different stages of their journeys of fleeing violence; not only at the point of exiting a violent relationship but rather for an extended period thereafter. Their journeys reveal a cycle of abuse that goes beyond the violence perpetrated by their direct abusers; this abuse is furthered by systemic and institutional failures and discrimination in the ways in which public authorities (the police, and housing authorities in particular) deal with their cases of violence. The re-victimization experienced by minoritised survivors plays out not only in terms of poor welfare/housing provisions and structural sexism but is also compounded by intersecting structures of oppressions based on race, immigration status, language barrier, class and/or disability.

The findings further indicate that Black and minoritised women tend to leave their abusers only after long periods of experiencing violence or after violence escalates, with this being mostly due
to isolation and unfamiliarity with the UK system. Most Black and minoritised women reported having decided to leave their houses following severe incidents of abuse which resulted in them being in contact with public services, in particular, the police, GPs, or local councils. It is therefore crucial that public authorities are sufficiently equipped to fulfil their duties under homelessness legislation, provide information to Black and minoritised women and make appropriate referrals based on a diverse pathways approach.

The recommendations presented by this report suggest concrete ways to move forward to ensure the UK complies with its national and international obligations towards all women subjected to violence, regardless of race and immigration status, in a fair and non-discriminatory manner.

For those at a national level 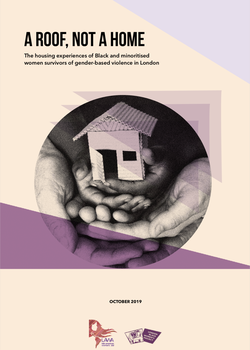