local authority area in England and Wales free from FGM

prevalence is highest in Southwark

No local authority area in England and Wales free from FGM

A series of maps and data tables visualising FGM prevalence data in England and Wales can be viewed on the City University London’s website here.

Key findings from a new report from City University London and Equality Now show that:

The new study, funded by Trust for London and the Home Office, is being published in its entirety tomorrow, on the one year anniversary of the Girl Summit, which was co-hosted by the UK and UNICEF. The report provides detailed estimates of FGM prevalence for each local authority area in England and Wales. It builds on interim findings published by City University London and Equality Now in July 2014, which showed that an estimated 137,000 women and girls affected by FGM and born in countries where it is practised were permanently resident in England and Wales in 2011. These figures are estimates and should be used as a guide.

The new research combined information from surveys in 29 countries where FGM is more commonly practised (and data are available) with information from the 2011 census about women who had migrated from those countries. It found that the highest prevalence rates in the population were in London boroughs, with the highest number being 4.7% of women in Southwark and 3.9% in Brent, compared to 0.5% in England and Wales as a whole.

Outside London, Manchester, Slough, Bristol, Leicester and Birmingham have high prevalence rates, ranging from 1.2 to 1.6%. Other authorities, including Milton Keynes, Cardiff, Coventry, Sheffield, Reading, Thurrock, Northampton and Oxford had rates of over 0.7%. For the most part, people born in countries where FGM is practised tend to be concentrated in urban areas, but there are likely to be affected women and girls living in every local authority area.

The report also combined the survey data with birth data from the Office for National Statistics. This enabled the researchers to estimate the numbers of mothers affected by FGM giving birth each year from 2005 to 2013 and, subsequently, the number of girls born in England and Wales to mothers who had undergone FGM. Again, numbers were highest in London and certain major cities, but some were also widely dispersed. As a consequence, the estimated percentage of girls born to mothers who are FGM survivors ranged from 10.4% in Southwark, to under 0.1% in many areas. This compares with an overall proportion of 1.6%.

Alison Macfarlane, Professor of Perinatal Health at City University London and author of the report, said:

“The figures in this report are estimates, based on numbers of women living in each area, who were born in countries where FGM is practised, and the prevalence of FGM in those countries. They suggest that women who have undergone FGM are living in virtually every part of England and Wales. The support they need may have to be organised differently in areas where only small numbers of women are affected, compared to areas with substantial populations of affected women. Support is needed for these women during pregnancy and childbirth and may also be needed for older women, because of long term complications of FGM.  It is important not to stigmatise women who have undergone FGM, or assume that their daughters are all at risk, as many families have given up FGM on migration and attitudes have changed in some of their countries of origin. On the other hand, others may have not given up FGM and it is important to safeguard their daughters.The women concerned are very diverse. Although some have had little education and have limited knowledge of English, many are university graduates, or at least have completed secondary school. As a result, the estimates in this report should be used as signposts to guide professionals in planning services for affected women and in engaging with them”.

“We hope that policy makers at all levels – including in local authorities – urgently respond to these new estimates. The UK as a whole should also continue to lead the way on providing a model to tackle this extreme form of violence against girls and women. This means stepping up work to prevent it, protecting girls at risk, providing support to survivors, pursuing prosecutions when necessary and continuing to develop relevant partnerships, to ensure that all work to end this human rights violation is ‘joined up’ and effective at every level. A crucial part of this is building on the community prevention work already being undertaken in the UK – this work is vital to achieving long term change”. 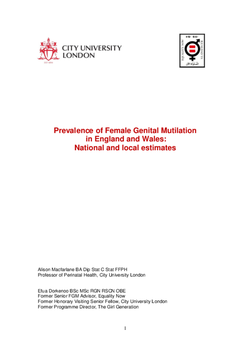