Moving on Up Initiative

The Moving on Up (MoU) Initiative is funded by Trust for London and City Bridge Trust, in partnership with the Black Training and Enterprise Group (BTEG).

Employers struggle to fill almost 1 in 4 job vacancies due to skills shortages. At the same time, there are high unemployment rates amongst some talented groups of young people.

Young black men have consistently experienced more unemployment than young men of other ethnicities. In London in 2013, the employment rate for young black men was just 56%, compared to 81% for young white men. Though this disparity improved over the next two years, it has stagnated since March 2016. This disparity does not just reflect educational differences between the two groups – in 2015, young black graduates were more than twice as likely to be unemployed than young white graduates one year after graduating (9.7% vs 4.6%).

The MoU Initiative aimed both to directly increase the employment rate amongst young black men in London through supporting targeted interventions; and to generate learning that could influence employers, mainstream employment support providers and funders/commissioners.

“Employers struggle to fill almost 1 in 4 job vacancies due to skills shortages. At the same time, there is an untapped talented pool of young people who are ready and keen to work. The unemployment rate for young black men is double the rate for young white men, even when they have the same level of qualifications. Thousands of young black men in London are available for and actively looking for work. That is not an impossible problem to solve. If employers, job centres, support providers and young black men pull together, we can end this inequality.”

There were a number of positive outcomes from the Initiative:

271 young black men are known to be in paid work following their participation in MoU.

This equates to a job entry rate of 40-60%. This finding is based on having data for 66% of the 683 participants that took part in MoU, so the real figure across 100% of participants is likely to be somewhere between 271 and 410.

MoU had the biggest impact on participants’ attitude, confidence and understanding of work.

Whilst some improvement was seen in career direction and more practical job application skills, survey and interview data indicates that MoU’s impact was driven more by psychological outcomes – with young black men being more motivated, confident, and aware of what employers are looking for.

The thing that MoU participants valued most about the projects was that the staff cared.

Participants consistently appreciated, at times effusively, that the project staff always gave them their time, showed a genuine interest in their success and wellbeing, and never gave up on them.

MoU participants also appreciated when the projects were targeted and tailored to young black men.

Many interviewees said they felt empowered by people caring about young black men as a group.

The MoU Initiative has been able to raise awareness among policymakers of the issue of young black male unemployment.

A London Advisory Group was established and received good engagement from the DWP, Jobcentre Plus and the Greater London Authority, among others. Damian Hinds, Minister of State for Work and Pensions, visited the MoU Initiative in 2016, and there are ongoing conversations with DWP about learning from MoU’s targeted approach to supporting young black men.

However, the research showed that some key barriers remain:

Engaging employers is a key challenge.

MoU-commissioned research by YouGov (2016) suggested that there is a need to raise awareness amongst employers about opportunities for young black men – as they were not top of mind for most.

Young black men have to deal with barriers which are additional to those facing other young people trying to find jobs.

Three-quarters of the project participants interviewed for this evaluation believe that as young black men they need to work harder than other young people to get a job.

MoU participants had high aspirations to begin with.

Social capital is still a key area of disadvantage.

In stark contrast to aspiration, participants scored lowest on baseline survey questions relating to social capital. These questions focused on using personal relationships to find work. This was also the only outcome not to improve at follow-up. Clearly this is an area that may need more intense, targeted support.

MoU participants had consistently negative views of Jobcentre Plus.

The participants’ positive views on project staff stood in contrast with their views of support from the Jobcentre Plus (JCP). 50% of survey respondents rated the value of JCP support as 1 on a scale of 1-5. They felt staff didn’t care about helping them, the sanctions are unfairly punitive and the job application targets are unrealistic and unhelpful.

What needs to happen next

This evaluation shows that what works to support young black men into decent jobs are locally developed, community-based services which are targeted at young black men and tailored to meet their needs, delivered by advisers who give them time and commitment. Peer group work and direct contact with employers are also factors for success.

was driven by psychological outcomes

engagement is a key challenge 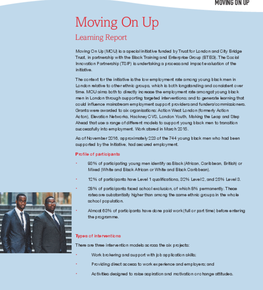