MIS is based on detailed discussions with members of the public about goods and services households need to reach a socially acceptable standard of living, which covers essentials and enables participation in society.

The new report provides an update of the cost of a minimum budget, needed for a minimum standard of living, for four core households in Inner and Outer London comparing these with the rest of the UK. The update is based on price increases between 2016 and 2017, along with available data concerning childcare, transport and housing costs in the capital.

The report is by researchers at the Centre for Research in Social Policy at Loughborough University and is funded by the Trust.

in the UK as a whole. This is 3.3 million Londoners with incomes below that

needed for a minimum decent standard of living. However, this has reduced

However, higher living costs, such as housing and childcare, mean that reaching

more than in the rest of the UK.

London and those outside of London. Private rents make up half of a minimum

weekly budget for single adults in Inner London and 40% in Outer London,

quarter of the minimum needed (after rent and council tax); in the rest of the

UK, the same benefits cover just over a third of the minimum needed by single

of living, working full-time on the NLW. It provides around half of the income

needed by single working-age Londoners, but over three-quarters of the income

needed to live in the rest of the UK.

of the capital in order to reach MIS. This is even higher if families with children

rent in the private rented sector.

MIS in the UK outside London and in Outer London. However, in Inner London

million. The proportion of pensioners below this level has increased from 23% to

nearly a third over the same period, numbering around 300,000.

households with insufficient income, compared to 31% of men.

of Londoners have an income below MIS, significantly higher than 30% in the UK as a whole.

increase in the National Living Wage (NLW) in April 2017 not enough for many households to reach the income needed for a minimum standard of living, working full-time on the NLW.

pensioners live below MIS in London 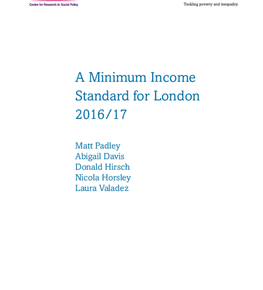 A Minimum Income Standard for London 2016 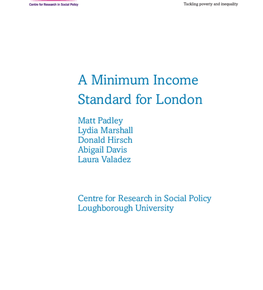 A Minimum Income Standard for London 2015