of British women are excluded from bringing a spouse or family member from outside the EU to live with them in the UK under the current £18,600 income threshold

of people under 30 are excluded from bringing a spouse or family member from outside the EU to live with them in the UK under the current £18,600 income threshold

of British citizens working as employees remain ineligible to bring a spouse to the country, based on their earnings in 2015

Women and young families are less likely to meet the current threshold for family migration.

A majority (55%) of British women and people under 30 (53%) are excluded from bringing a spouse or family member from outside the EU to live with them in the UK under the current £18,600 income threshold, a new report by the Migration Observatory at the University of Oxford shows today.

The report, The Minimum Income Requirement for non-EEA Family Members in the UK, has been produced ahead of a Supreme Court review of the policy next month and looks at how the threshold affects British citizens working as employees in the UK.

It shows that just over forty percent of British citizens working as employees remain ineligible to bring a spouse to the country, based on their earnings in 2015. As well as women and young people, UK citizens are less likely to earn enough to meet the threshold if they do not have higher education (53%).

Unlike people living in the rest of the UK, a majority of British citizens who are London dwellers (73%) meet the threshold, even if they are female (67%), under the age of 30 (69%) or do not have higher education (53%).

How easily couples can meet the income requirement also depends on which partner earns more income. Under current rules, people who are working abroad when they apply to join their spouse in the UK cannot count their earnings towards the threshold. This is because of the concern that they will not work—and hence contribute to supporting their family without access to welfare benefits—after they arrive.

“In some respects, the current family migration rules prioritise couples in which the UK partner is the main breadwinner. That is likely to make it easier for men to sponsor their wives rather than vice versa.”

Carlos Vargas-Silva, Senior Researcher at the Migration Observatory at the University of Oxford

The very limited data on applicants’ employment abroad make it difficult to assess how many couples would be affected if foreign income were treated differently, and thus how much family migration might increase if the Supreme Court requires changes to the rules. Women make up a minority of UK-based sponsors, and a snapshot of data from 2009 suggested that most spouses being sponsored to come to the UK were not working abroad at the time of the application.

The report also notes that there is no single way to calculate the income threshold. The current £18,600 threshold was based on analysis by the government’s independent Migration Advisory Committee (MAC) which was asked to advise on the income level at which migrants will not become a ‘burden on the state.’ Other ways of calculating the income threshold were also considered at the time the policy was designed, and could have led to either higher or lower thresholds depending on the methodological approach selected.

“There is no magic number defining the level of income at which a family is expected make an economic contribution. And, of course, economic factors are not the only ones that are relevant when deciding whether people should be able to bring their partners to the UK.”

Carlos Vargas-Silva, Senior Researcher at the Migration Observatory at the University of Oxford

The income threshold was introduced alongside a suite of policy changes aiming to reduce net migration to the UK during the last parliament. The policy applies to British citizens and to settled migrants in the UK. 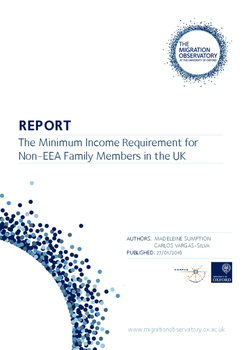