What you need to know:

Trust for London, on behalf of the Citizenship and Integration Initiative, and the UK Democracy Fund, a Joseph Rowntree Reform Trust initiative, have come together to support comprehensive research into the mechanisms that can facilitate equal, inclusive, representative civic and democratic participation as part of the London Voices project. The Greater London Authority (GLA) has supported this research and its wider aims. The report has been drafted independently of the GLA and the Mayor of London and as a result makes recommendations for both.

Everyone has a unique journey to civic and democratic participation. Whether we speak about volunteering, voting, voicing a view in a consultation or contacting a local representative, our lived experiences make up our journeys. London Voices maps out Londoners’ journeys to civic and democratic participation, with a focus on under-represented and marginalised Londoners - Black, minority ethnic and migrant Londoners; Deaf and disabled Londoners; young and private renting Londoners.

In this report, civic participation is defined as the ways in which Londoners want and are able to engage in their local community. For example, it includes running or trying to set up a local service (formal or informal volunteering), organising a community, sport or culture event, setting up or signing a petition, writing to and booking a meeting with a representative (councillor, MP, etc).

Democratic participation is defined as the degree to which Londoners want and are able to engage in London’s and the UK democratic system. For example, it includes campaigning for a political issue and/or a political party, running as a party – political or independent candidate for public office, being able and willing to register to vote, and voting in elections.

The report argues that civic and democratic participation in London and the United Kingdom more broadly need to be addressed urgently. Voter turnout is one of the most important indicators of democratic participation. London had a voter turnout of 67.5% in the 2019 General Election, compared with a UK - wide turnout of 67.3%, both rates below averages in most Western European countries. In the 2018 London local elections, the voter turnout was 39%, compared to 42% in the postponed 2021 Mayoral and Assembly elections.

The survey results show that civil society organisations make a huge contribution to civic participation in London – over 60% of civil society organisations who took part have organised training, mentoring or community events that enable the civic participation of Londoners. However, only around a third have organised initiatives around voter registration or other democratic awareness activities. There is a clear gap in how comfortable civil society feels organising community events, compared to events related to elections. This missed potential needs to be addressed. Funders, civic, democratic and political institutions need to support civil society to campaign and organise non-party political, impartial civic and political participation initiatives. Some key changes that civil society would like to see in this respect are:

This research illustrates the full journey to participation in London through the lived experiences of under-represented groups. Following the analysis of the stakeholder survey, complemented by the qualitative interview findings, this report focuses on presenting challenges and opportunities in civic and democratic participation through the voices of different communities. The case studies section of the report shows the perspectives of faith and non-faith Londoners, Black and minority ethnic Londoners, migrant and refugee communities, and young Londoners. Some case studies detail specific challenges brought by the COVID-19 pandemic, including the impact on community building and grassroots organising. This section’s aim is also to show examples of innovative civic and democratic engagement, for instance through the case studies on London Voter Registration Week (LVRW) or grassroots-led campaigns like She Votes.

Finally, the report presents a series of detailed and practical recommendations for local authorities, the Greater London Assembly, the Mayor of London, Central Government, funders, civil society and political parties. These were co-designed with under- represented Londoners and an Advisory Board. If implemented, some immediately, others in the medium and long term, they could significantly improve Londoners’ belonging, their trust in democratic systems and institutions, the feeling of being heard and the ability to use their voice and power to decide their future and the future of their city and the country! 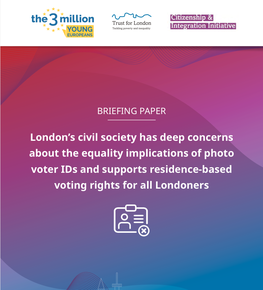