London Stalling: Half a Century of living standards in London

of London's employment growth has come from hospitality and administrative services.

is the change in London's productivity over the last decade, compared to +1.5% across the UK.

housing failure bill is faced by the average London household.

London Stalling analyses London's economic and living standards performance over the last 50 years. Its findings counter the idea that London's economy has outperformed the economy of the rest of the UK since the financial crisis.

While London's economy has grown more than the rest of the UK's since 2007, this growth has been driven by rising employment and hours rather than productivity improvements. This employment growth has, in turn, largely come from low-paying, low-productivity sectors. As a result, London's productivity has actually fallen by 1% over the last decade, compared to an increase of 1.5% across the UK as a whole.

For people on low-incomes, though living standards have improved in absolute terms, the capital is probably a more challenging place than ever before in relative terms. Employment rates have improved significantly, and pay is higher too. But the rising housing costs, wealth inequality and the diminished impact of the National Living Wage in London creates unique cost pressures for Londoners.

London has lots of aspects needed for a city to flourish - high employment, a well educated workforce and the highest concentration of high paying sectors in the country. But the city's response to many old and new challenges it faces will determine how Londoner's living standards evolve in the future. This success will greatly affect the UK a a whole, not just because of the importance of London on the wider UK economy, but because many of the issues facing London are problems which the rest of the country must also contend with.

Read the London Stalling report below 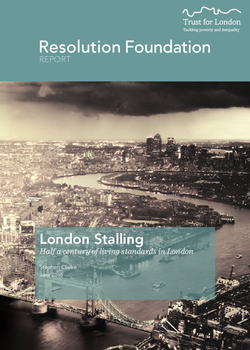 London Stalling: Half a Century of living standards in London