employers per annum committed to paying a living wage, in the first decade of the campaign

employers committed to paying a living wage in October 2014

This report by Cambridge Policy Consultants evaluates the effects of the £1 million plus invested by Trust for London since 2008 into the campaign by Citizens UK.

This investment has led to:

The report makes clear that community organising laid solid foundations for the living wage campaign and is critical in mobilising individuals to engage in activity. It was also integral to securing support from the Mayor of London and the Leader of the Labour Party. However, it was the creation of the Living Wage Foundation which delivered the step change. It was vital infrastructure, providing a platform to support the mainstreaming of the living wage and a process to formally accredit employers.

The concept of the living wage has now become mainstream, with considerable media coverage gained and support from a wide range of organisations. This greater public awareness has been important in engaging and accrediting employers and has been aided by the launch of an annual Living Wage Week.

Interestingly, the economic downturn may actually have helped the campaign. Increasing in-work poverty and the rising cost of living created greater awareness of the problem of low pay and an appetite for solutions such as the living wage.

There are a number of findings on the attitudes and effects on employers: 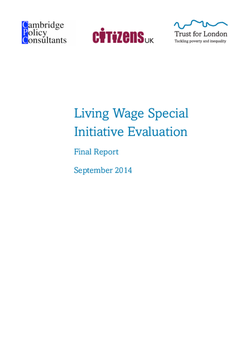