The Inbetweeners: The New Role of Internships in the Graduate Labour Market

rise in number of internships offered by top graduate recruiters

Research finds number of internships has doubled since 2010 while the number of graduates in high skilled jobs fall into long-term decline.

New research from IPPR, the progressive policy think tank, shows internships are on the rise in the UK’s most competitive sectors and are now a ‘must have’ for many top jobs for young people.

The number of internships offered by top graduate recruiters has risen by as much as 50 per cent since 2010. Nearly half of these employers say that candidates without this work experience ‘have little or no chance of receiving a job offer’.

However, the proportion of graduates in high-skilled work is in long-term decline: while 61 per cent of graduates aged 21 to 30 were employed in high-skill occupations in 2008, today only 56 per cent are. An oversupply of graduates effectively means that recruiters can more easily attract graduates to work for free or in low-paid, insecure work. In interviews with young people IPPR’s research found evidence of exploitation, poor working conditions and a lack of meaningful work opportunities.

Some sectors, such as publishing, media and the arts, are proving particularly difficult to access for those without a parent in a managerial or professional occupation. These sectors also have particularly high concentrations of internships. For example, film and television accounts for eight per cent of the jobs market as a whole but 16 per cent of the internships on offer.

While there is a lack of data on unpaid internships given they are often informal and often illegal it has been estimated that 1 in 5 is unpaid, though the proportion varies widely by sector. To prevent internships both paid and unpaid from being a barrier to social mobility, IPPR argues that employers need to offer placements to young people of all backgrounds, not just a privileged few:

Alongside the report IPPR is launching a new guide to fair internships for employers.

“There has been an unstoppable rise in internships since the last recession which shows no sign of slowing down. This is creating a structural bottleneck in the graduate labour market, at a time when fewer graduates are in high-skilled work than a decade ago. This means that young people are now more reliant than ever on finding a good internship to get a foot on the graduate jobs ladder. Although Theresa May agrees that getting on in today’s Britain is still ‘too often determined by wealth or circumstance’, internships are too often restricted to a privileged few. For internships to help rather than hinder social mobility, universities, employers and government should act together to increase the overall availability of internships and minimise any barriers to take up for those who are disadvantaged.”

“This report is welcome. Internships are the new first rung on the professional ladder. They provide access to the best careers, but are too often unpaid and not advertised, making them inaccessible to young people who are locked out of these opportunities because they cannot afford to work for free. Restricted access to internships is bad for interns, business, the economy and acts as a major barrier to social mobility. The practice of unpaid and inaccessible internships should end.”

The research was funded by Trust for London. 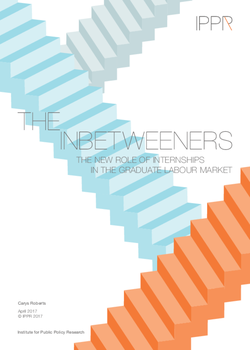 The Inbetweeners: The New Role of Internships in the Graduate Labour Market