women and girls affected by FGM, born in countries where FGM is practised, were permanently resident in England and Wales in 2011

It is estimated that, since 2008, women with FGM have made up about 1.5 per cent of all women delivering in England and Wales each year.

This study funded by Trust for London and the Home Office shows that 137,000 women and girls affected by FGM, born in countries where FGM is practised, were permanently resident in England and Wales in 2011.

The study shows that the numbers of women with female genital mutilation living in England and Wales are likely to have increased from 2001 to 2011.

The research was carried out by academics at City University London in collaboration with Equality Now. The study publishes  information from surveys in 29 countries in which FGM is practised along with information from the 2011 census about women who have migrated from those countries. It estimates that:

This is an interim report of the study. Further work will derive estimates for local areas to enable professionals to plan services to support affected women and safeguard their daughters. Census data show that: 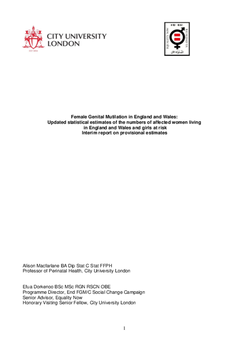