Faulty Towers: Understanding the impact of overseas corruption on the London property market

of homes in new landmark London developments have been sold to investors from high corruption risk countries or those hiding behind anonymous companies.

of luxury apartments in a tower on the Southbank Place development, next to the London Eye, have been bought by companies registered in the British Virgin Islands.

of the new homes in one of the blocks of the Westminster Quarter development have been bought by investors from high corruption risk countries, compared to just over 10 per cent bought by UK buyers.

Overseas corruption is pricing Londoners out of the capital. London’s status as a safe haven for corrupt money is contributing to the “broken” UK housing market.

Billions of pounds of investment, much of it driven by overseas corruption, is flowing into London property and exacerbating the capital’s housing crisis, according to new research from Transparency International UK.

“Faulty Towers: Understanding the impact of overseas corruption on the London property market” assessed 14 new landmark London developments, worth at least £1.6 billion. It found 4 in 10 of the homes in these developments have been sold to investors from high corruption risk countries or those hiding behind anonymous companies. Less than a quarter had been bought by buyers based in the UK.

There is also evidence to suggest that many of these homes are rarely used. In Westminster where around 10 per cent of homes are owned by anonymous companies, over 5 per cent of properties showed an abnormally low level of electricity use, whilst other boroughs with high numbers of anonymously owned property follow a similar trend.

“While Londoners find themselves priced out of the capital, many new homes are left unused by wealthy investors based overseas. Londoners aren’t the only ones losing out: demand for London property is fuelled by the corruption that robs public services of vital funds all around the world. Others feel the need to move their legitimate wealth here out of fear of what might happen to it in countries where corruption is endemic or has brought instability in times of crisis.”

There is a growing awareness of the risk of corrupt money flowing into London. Previously our research found at least 40,000 London properties were bought using anonymous companies, registered in countries which do not publish company ownership data. New analysis of open source data in Faulty Towers finds £4.2 billion worth of London property bought by those representing a high money laundering risk.

The public increasingly understand the role of wealthy overseas investors in the current housing crisis. 54 per cent of a representative sample of Londoners in a poll conducted by YouGov on behalf of Transparency International UK said they believe rich people from overseas, buying up high-end property, is driving up house prices. More than 1 in 5 (22%) thought international buyers were purchasing property in order to launder money.

Corruption can also impact London’s property market through its status as a prime destination for crisis capital. Large amounts of wealth fleeing insecurity overseas, often caused by corruption, is being invested into the capital’s property market.

“Successive Governments have come to realise that London is treated as a safe haven for corrupt money from overseas. We now need to prevent laundered money and crisis capital from distorting London’s property market. The determined use of Unexplained Wealth Orders, a new investigatory power for UK law enforcement in the Criminal Finances Bill, would show the Government is taking this issue seriously. Our research has identified at least 140 London properties, with a value of £4.2 billion, which should be assessed as the prime targets for these new powers. London property should be used as homes for those that need them and not left underused simply as a safe way to store wealth. We can only solve this problem if we root out the illicit wealth here and tackle corruption abroad.” 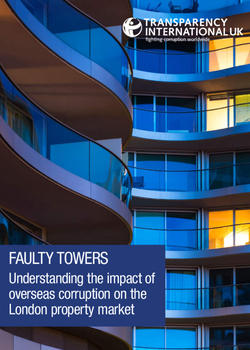 Faulty Towers: Understanding the impact of overseas corruption on the London property market

Pretty Vacant: The negative impact of wealth investment on access to housing in London