Ethnic Inequalities in London – Capital For All

of Africans live in overcrowded accommodation, compared to the average of 14%

of Bangladeshis live in overcrowded accommodation, compared to the average of 14%

Profiles for each of the capital’s boroughs show Lambeth is most unequal place to live for BME people, while Barking and Dagenham is the most equal. Runnymede Trust call on the next London mayor to reduce racial inequalities by 2020.

A league table of racial inequality in London has shown startling differences between the capital’s 32 boroughs on housing, education, employment and health.

A new report by the race equality think tank, the Runnymede Trust, reveals that:

The report found the worst London boroughs for racial inequality were Lambeth, Haringey, Tower Hamlets, Brent and Hammersmith & Fulham. The boroughs with the least inequality between BME and White citizens were Barking & Dagenham, Sutton, Newham, Havering and Greenwich.

Runnymede will also be publishing detailed profiles on the racial inequalities for each of the 32 boroughs, and each individual BME community.

“This report should act as a wake-up call to all the mayoral candidates. London’s racial divide means the capital is squandering talent that could be adding to our competitiveness as the economic engine of Britain. Beneath the Olympic image of multi-ethnic, multi-faith London is one of a worsening gap between BME and White Londoners. Given that London is almost 40 percent BME that means the capital has a major problem to avoid it being a city of two halves.”

Dr Omar Khan, director of the Runnymede Trust and the other author of the report, added:

“Housing has been the number one issue in the London elections so far, but what is missing from the debate is a recognition that if you are a black, Asian or minority ethnic citizen you are up to three times more likely to be living in overcrowded accommodation. Our report shows that there is a need to fix the racial inequalities in housing as well as the overall housing crisis. We are calling on the next mayor to commit to reducing these inequalities over their term in office.” 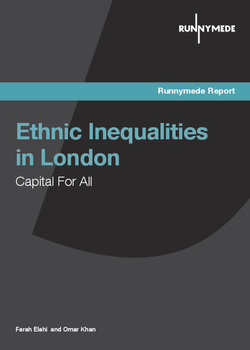 Ethnic Inequalities in London – Capital For All

Evictions: where are we now? What needs to change?