The Youth Obligation: Does it work?

of young people on the Youth Obligation were sanctioned

of young people were not offered a work placement

The government’s flagship youth unemployment programme aims to provide unemployed 18 to 21 year olds with intensive support to help them find a job. There’s also the promise of a traineeship or work placement if they’re still not in work after six months.

Centrepoint welcomes any government policy that means disadvantaged young people receive extra help to enter the workplace. But concerns were raised about how the Youth Obligation programme might work in practice, particularly as it increases the risk of sanctions if young people are expected to attend more sessions at the Jobcentre.

Over the past year, with Trust for London funding, Centrepoint commissioned the University of Warwick to evaluate the Youth Obligation.

Sanctioning rates were higher for young people on the Youth Obligation

Despite the promise of a work placement offer, 96% of the young people surveyed were not offered a traineeship or work placement if they were still on the Youth Obligation after six months.

Support should be tailored to the sector

Only 12% of young people surveyed rated Jobcentre staff understanding of their situation as good. If tailored support is going to be offered to vulnerable claimants, it is essential that every single young person feels their situation is understood.

Jobcentres should reach out to third party providers more often. Providers such as Centrepoint understand the needs of the young people they support and can work with Jobcentres to offer them the tailored support they need. 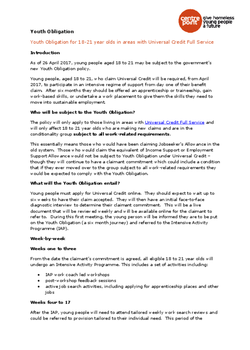 The Youth Obligation: Does it work?