The unspoken decline of Outer London: Why is poverty and inequality increasing in Outer London and what needs to change?

of London's most deprived wards are in Outer London

rates are a third higher in Outer London than Inner London

Outer London has traditionally been viewed as a place of relative affluence with low levels of poverty. Whether this was ever really the case is debatable, but what is apparent are telling signs of poverty increasing and de-gentrification taking hold in some outer London areas. This report, based on data analysis, focus groups with low-income outer Londoners and interviews and discussions with practitioners and experts seeks to understand what might be driving these changes, what the impacts and consequences are and what interventions might be needed to tackle poverty and achieve inclusive growth in Outer London.

London is now entering a new era and its leaders will need to plan ahead carefully to deliver the shared prosperity its citizens want. A poorer and more divided city, with an ever-widening gap between a wealthier inner London and a poorer outer London is not an option. As this report argues, renewed efforts are required to secure inclusive and sustainable growth across all London’s boroughs – not a displacement from one area to another.

A new vision for Outer London, a new focus on poverty and inclusive growth

Regeneration that works for all 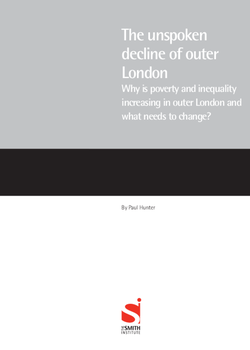 The unspoken decline of Outer London: Why is poverty and inequality increasing in Outer London and what needs to change?

Why London’s Poverty Profile is needed now more than ever