Cuts to social rents will benefit exchequer more than tenants, but will strengthen work incentives.

Reductions in social rents announced in the July Budget will be of little or no direct benefit to most of the 3.9 million households in England living in social housing. Most of those renting their home from councils or housing associations have low incomes and hence receive housing benefit to cover all or part of their rent. Entitlement to housing benefit will typically be reduced pound-for-pound as their rent falls.

The reduction in housing benefit will save the exchequer money, and will strengthen tenants’ work incentives as they have less means-tested support to lose by entering work or increasing their earnings. Social landlords – housing associations and local authorities – will lose money.

These are among the conclusions of a new report on social rent policy, published today by the Institute for Fiscal Studies (IFS) and funded by Trust for London.

After many years of real increases in social rents, the July Budget announced a 1% annual reduction in social rents in England for the next four years. Given that previous policy was to raise rents by CPI inflation + 1% each year, this means that social rents are expected to be 12% lower than they would otherwise have been by 2019–20.

The policy largely represents a transfer from social landlords (councils and housing associations) to the exchequer, rather than to social tenants.

This is because the reduction in social rents will automatically trigger an offsetting fall in housing benefit entitlements of £1.7 billion. Tenants’ disposable incomes will rise by only £0.7 billion. These figures assume that all social tenants entitled to housing benefit take it up.

Tenants who do gain from the rent cut will tend to be around the middle of the income distribution.

The cut to social rents will strengthen the financial work incentives of social tenants, on average.

With lower rents, tenants will have less means-tested housing benefit to lose if they move into work or increase their earnings. But lower rents also increase the financial incentive to seek access to social housing, and for existing tenants to remain there rather than, for example, exercising the Right to Buy their home. Today’s report does not assess the extent to which people will respond to these incentives.

By reducing the annual rental income of social landlords by £2.3 billion, the cut in social rents could reduce the amount of new housing supply.

The Office for Budget Responsibility assumes that 14,000 fewer social sector properties will be built between now and 2020–21 as a result. The report also analyses a second Budget announcement: ‘Pay to Stay’. From April 2017, social landlords will be required to charge market or ‘near market’ rents to tenants in England with incomes above £30,000 (£40,000 in London).

We expect Pay to Stay to hit around 250,000 households per year (about 7% of social renting households in England).

Four-fifths of those households are in the top half of the income distribution.

Important decisions about Pay to Stay have yet to be taken, including how sharply rents increase as incomes rise beyond the threshold.

The effects on tenants’ disposable incomes and work incentives, and on revenue for housing associations and the exchequer (which will require councils to hand it the extra rental income), are sensitive to these choices.

If rents jump straight up to market levels when income reaches the threshold (a ‘cliff edge’), people earning £1 more could pay thousands of pounds more rent.

That would be inequitable and create perverse incentives: any pay rise that meant crossing the threshold would trigger a rent increase averaging about £3,000 a year.

Increasing rents gradually as incomes rise above the threshold would be more sensible.

Work incentives would still be weakened on average, and this might be more complex to administer, but it would avoid the extreme disincentive effects associated with a cliff edge. Choosing how gradually to increase rents involves delicate trade-offs over revenue, incentives and targeting of support.

perhaps by exercising their Right to Buy. This would lead to a further reduction in economic diversity among social tenants.

"Recent policy on social rents displays a worrying lack of consistency. The government had committed to increasing social rents for ten years; but after just one of those ten years, it announced that rents will instead fall for the next four years. This instability could damage the ability of social landlords to plan and finance new house-building."

Robert Joyce, Senior Research Economist at the IFS and author of the report

"There are trade-offs between the targeting of support and tenants’ incentives to increase their incomes. Pay to Stay will target the rent subsidy more closely on those in current need, but at the expense of weakening tenants’ work incentives."

Andrew Hood, Research Economist at the IFS and another author of the report 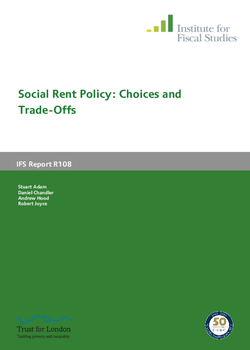