A report from Centre for London and Trust for London, Settle for Nothing Less, reveals systemic failures in the way national minimum wage (NMW) compliance is enforced and sets out a bold agenda for reform.

There are particular problems in London with:

The new research paper, authored by Andy Hull, recommends a number of reforms, including:

Removing the limit on fines levied against employers paying below the NMW
The current cap of £5,000 is too low and should be removed altogether. There is also a need for high-profile ‘naming and shaming’ and a more rigorous pursuit of repeat offenders for prosecution.

Insisting on NMW payment for home carers’ travel time
Payment of the NMW to domiciliary care workers for their at-work travel time needs to be a requirement of any care work contract issued by a Local Authority.

This report is the second in a series on low pay. The first report, authored by former Treasury Minister Kitty Usher, argues that a London weighting should be added to the minimum wage. Kitty shows that a minimum wage of £6.75 per hour could be paid in the capital without effecting jobs or competitiveness. 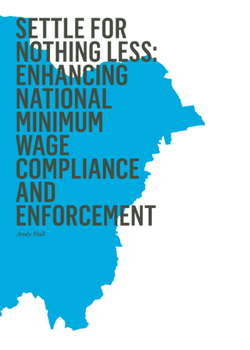