of participants suffering from asthma compared to 8.4% in the general population

Homelessness and Respiratory Health – A Matter of Life and Death

Groundswell have recently conducted a Peer-Led Health Audit exploring the respiratory health of homeless people Room-to-Breathe. The project, funded by Trust For London, has revealed the shocking extent of health inequality experienced by homeless people. Groundswell engaged over 330 people currently experiencing homelessness through focus groups and one-to-one survey based interviews – exploring existing health conditions and access to services. Findings include:

A key factor in the incredibly poor respiratory and lung health of homeless people is the high rates of smoking tobacco and illicit substances.

The scale of the problem and the support needs of people experiencing homelessness mean that new approaches are needed to tackle this issue. Groundswell have established a task group of experts in respiratory health from the London Respiratory Network and Pan London Airway Network and staff from Pathways, St Mungos and Find&Treat. We are supporting partner organisations to pilot new initiatives to tackle the issue including Respiratory testing in Homeless Services and support-to-quit initiatives.

“Respiratory health is a huge issue for people experiencing homelessness and action needs to be taken to address this life threatening health inequality. Our report has revealed that current health and homelessness service provision is failing people and pro-active steps should be taken towards better prevention, diagnosis and treatment. Groundswell are committed to combatting the health inequalities faced by people experiencing homelessness and we call for commissioners of health and homelessness services to be more proactive to ensure that the health needs of homeless people are better met.” 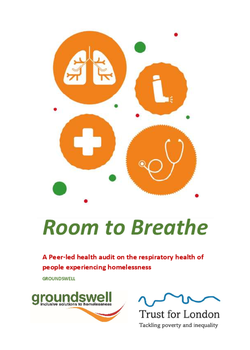