Poverty and Austerity: The Condition of London

reduction (26%) in funding of local authorities between April 2011 and March 2015, excluding schools, police and fire

This report covers the discussion and recommendations from an event organised by London Funders and Trust for London in October 2014.

The event brought together funders from across London to hear about and discuss two programmes of research on poverty and social issues and consider the implications for London and for their work. Both studies have been informed by lengthy research and have considered previous studies and long term policy trends, producing many outputs.

The two studies in question are:

The event sought to facilitate discussion on the findings of the two studies and the implications for London. Group discussion focussed on a number of key themes, with funders largely agreeing that local government cuts have hit those least able to afford it, leading to increased polarisation in London. Additionally, it was agreed that a more preventative approach to funding was needed.

The event was organised by London Funders in partnership with Trust for London and was hosted by CCLA. 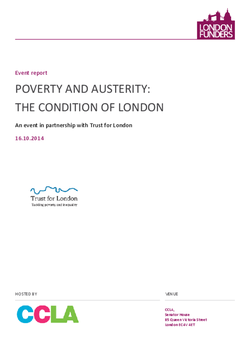 Poverty and Austerity: The Condition of London