A Poor Tax - Council Tax in London: Time for reform

more council tax is paid by the poorest than the richest Londoners as a proportion of income.

of core spending power in Richmond was generated by council tax revenues in 2017/18. This compares to just 25% in Westminster.

Council tax is considered by many to be in the ‘too difficult to touch’ box when it comes to reform. Haunted by memories of the community charge, better known as the poll tax, which is widely perceived to have contributed to the fall of Margaret Thatcher, the majority of national politicians daren’t even speak of reform, let alone propose any change, for fear of the political consequences.

But leaving council tax unreformed is becoming ever more unsustainable. Local authorities across the country are increasingly cash strapped as a consequence of government cuts to their core grant funding and limits on their ability to raise funds through council tax and other sources. Moreover, the direction of public policy is towards greater devolution and allowing local politicians, accountable to their local electorates, to have a greater say – not just about what services should be prioritised, but how the funds for them should be raised.

Perhaps most significantly, however, is just how unfair the current system has become. Our research, focused on London, but with wider relevance for the whole system across England, demonstrates how council tax has become increasingly regressive with regard to property values – the cheaper your property, the more you are likely to pay as a proportion of your property value. What is more, our analysis shows that council tax has become substantially more regressive with regard to income too. Property taxes are not designed to be progressive with regard to income but many people believe that ability to pay is an important conception of fairness – however we conclude in this report that council tax has become more regressive for the poorest Londoners than we consider acceptable. The most substantial reform to the council tax system since its inception – the devolution of council tax benefit – is further exacerbating the regressive impact of the system on London’s poorest. IPPR will be setting out its proposals for reforming council tax later in the year but as our findings in this report make clear, the time for reform has come.

Our case for change rests on five fundamental arguments.

The council tax system is increasingly regressive with regard to property value and is therefore unfair.

We also highlight the spatial inequalities that exist in the capital with substantial differences in what is charged in different areas of London.

The council tax system, including its income support system, council tax reduction (CTR), takes too little account of ability to pay and is therefore unfair.

Furthermore, recent changes to the CTR system and cuts to its funding will only worsen the impacts for the capital’s poorest.

The council tax system is inefficient.

We expose the inefficiencies of the council tax system including its reliance on outdated property prices, discounts and exemptions and the inconsistencies between residential and commercial taxation.

Council tax is becoming ever more important as a source of local government revenue but as local authorities become more reliant on it, it is increasingly not up to the task.

There is public appetite among Londoners for reform.

The public recognise many of the flaws in the council tax system and want to see change. 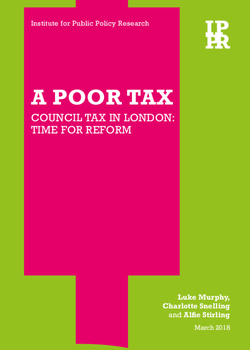 A Poor Tax - Council Tax in London: Time for reform

10 tips for talking about equality

Investment outside of London is to be welcomed, but we cannot let the country forget that millions of Londoners are struggling too

The new @fawcettsociety Sex & Power Index finds that women are still vastly underrepresented in positions of power. They're calling on the gov to improve the gender #PayGap by requiring companies to publish action plans & introduce reporting by ethnicity http://bit.ly/2tI0gwn

If you're a charity that supports women and girls, you have until Fri 24 Jan to apply to @Media_Trust Women's Voices event. Gain free communications advice from media and creative industry pros at this event celebrating International Women’s Day. https://bit.ly/2QRfk3T

Why does it cost people on low incomes more to borrow money on credit, or heat their home? @CarlPackman from our grantee @FairByDesign explains the #PovertyPremium on the latest episode of @SmartMoneyPPL ‘Money Bites’ podcast. You can listen here: http://bit.ly/FBDpodcast  pic.twitter.com/EHbUsnal6f

"In the UK wealth inequality is twice as bad as income inequality"- interesting piece in @Independent from @robertnpalmer , head of @TaxJusticeUK , our grantee who we provide funding towards to campaign on highlighting inequality & championing smarter taxes http://bit.ly/2TPMvGH

The chart below is taken from our recently funded @resfoundation report showing that overall, Londoners have the longest working weeks on average across the country. Read the full report and its full findings here http://bit.ly/2G9AzYu  pic.twitter.com/enZyL6s4so