Paying the price: The long road to recovery

of working single parents are in low-paid jobs, compared with 21% of other workers.

non-working single parents left their last paid job after redundancy, having their wage or hours cut or their temporary contract ending.

The findings by Gingerbread shows that work is failing to provide the majority of working single parent families with the income they need, with two thirds saying finances are a constant struggle at best and one in ten saying they are not coping financially.

More than 2,000 single parents shared their experiences in an online survey and 23 took part in one-to-one interviews for the report.

Single parents taking part in Gingerbread’s research reported taking on extra hours at work, working multiple jobs and having to take a gamble on temporary or zero-hours contracts as they attempt to mitigate wage cuts and the rising costs of family essentials.

The independent report was part-funded by Trust for London. 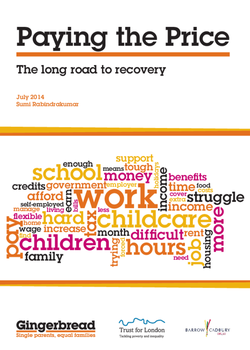 Paying the price: The long road to recovery