of access to and low-quality careers advice means young disadvantaged Londoners are let down.

about student debt can mean some do not pursue higher education regardless of their ability.

to access a number of professional sectors and occupations means issues associated with social and cultural capital are exacerbated.

Political debate around social mobility tends to describe London as a success story. This reflects the tendency among politicians and commentators to see social mobility through the lens of school performance and exam results. The Social Mobility Commission (SMC) refers to London as a social mobility hotspot; however, this warrants closer investigation. The aim of this research is to understand to what extent disadvantaged Londoners can translate their better-than-average education attainment into successful careers.

Disadvantaged young people do exceptionally well in London’s education system up until the age of 16. Although students eligible for free school meals (FSM) underperform against the wider student population in London, the difference between the groups is much less marked than in other regions. Unfortunately, this performance at 16 does not continue into A level. Inner London’s strong performance at GCSE does not appear to translate into high A level grades.

London does exceptionally well at sending students from disadvantaged backgrounds to university. However, this is only part of the story - we know students at university in London are more likely to drop out of university compared to the other regions of England. Graduates are also affected by degree class attainment gaps by ethnicity and socio-economic status.

Although London has higher wages than other regions, London also has above average unemployment. The competitive nature of the city’s labour market can mean that graduates from London struggle to obtain graduate jobs. Graduates who lived in London prior to university have the lowest employment rate of graduates in England, and this is true one, three, five and ten years post-graduation. For those who gain employment, the story is more positive, with graduates from London having one of highest median salaries across the same time period.

Using the Next Steps dataset (LYSPE), The Social Market Foundation tracked Londoners who performed well at GCSE (5+ A* to C grades including English and Maths) into the labour market. This shows that those from lower socio-economic backgrounds have significantly lower earnings at age 26 compared to those from more advantaged backgrounds. Londoners who have a degree and are from lower socio-economic backgrounds experience a ‘pay penalty’ of £1,664 per year. For those without a degree this pay penalty stands at £4,004.

Those from disadvantaged backgrounds who attended university are significantly less likely to have needed their highest qualification to secure their current job.

During this project, the Social Market Foundation have conducted qualitative research with 20 young Londoners who were eligible for FSM during their school years, performed well during their GCSEs and were aged 24 to 28 at the time of interview. This research, combined with conversations with prominent London employers and third sector organisations, enabled them to identify five barriers to success facing Londoners.

The report puts forward ten policy measures to combat some of these barriers. 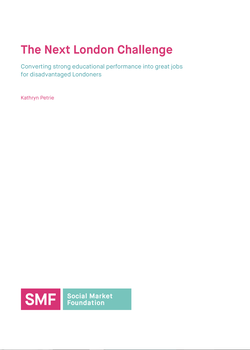