Living Wage will not lead to job losses

case for London having its own higher minimum wage

A new report finds that London’s economy will not suffer job losses as mandatory minimum wage rises to £7.20. The London economy can currently support a wage of up to £8.00 without impacting employment.

The office for Budget Responsibility, the CBI and other business groups have said that the new national living wage will cause job losses. If this is the case, they will not occur in London.

Research released today has shown that the Government’s new ‘national living wage’, announced by the Chancellor this summer, will not lead to job losses in London. The report is published by the independent think tank Centre for London, and is written by Kitty Ussher, a leading economist and former Treasury Minister. The report was funded by Trust for London.

In the past the national minimum wage has been set by the Low Pay Commission at a level that will not harm employment. Centre for London used the Commission’s modelling techniques to measure the workforce impact of the ‘national living wage’ (which has been set relative to median wages rather than employment impact) on London’s unique economy. Despite many institutions including the CBI warning that the ‘national living wage’ will lead to job losses nationally, the new report shows that London employment will not suffer.

The findings highlight the problems in applying a one-size-fits-all minimum wage across different regions. While London could support a higher minimum wage in the long term, setting a nationwide rate at a level suitable for London could have a negative impact on other parts of the UK. US cities such as Seattle and San Francisco have successfully introduced city-wide minimum wage levels to the benefit of the city and the surrounding area.

“Our research shows that there remains a case for a London minimum wage: even after the introduction of the national living wage for over-25s, low paid younger people in London can get a pay rise without jeopardising jobs. But on top of that, it is now becoming clear that the 60,000 people across the UK who are estimated to lose their jobs as a result of the introduction of a national living wage, are unlikely to live in London. It is time for the Chancellor to explain where these job losses are likely to come, and what his plans are to support those affected.”

“There have been many warning that the new living wage will lead to job losses. This report shows that if jobs are lost they will not be in London – this could lead to an even wider economic gap between London and the rest of the UK. It is time for the Government to take a closer look at the regional minimum wages which have been a huge success is American cities.”

“It costs between 20% and 50% more for different households to reach a decent standard of living in London than in the rest of the country. With poorer Londoners only getting paid around 12% more than their counterparts outside of the capital, there is a clear case for London having its own higher minimum wage.” 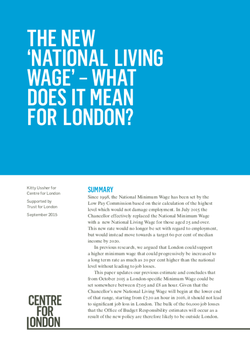 Is there a public consensus on what it means to be rich?