A Minimum Income Standard for London

higher cost to living in London, in comparison to the rest of the UK

costs arise from higher prices, but also influenced by the way people live and the infrastructure of London

CENTRE FOR RESEARCH IN SOCIAL POLICY AT LOUGHBOROUGH UNIVERSITY

1 in 3 Londoners can’t afford a decent standard of living.

New research from Loughborough University shows that a third of Londoners have less income than they need for what the public regard as a decent standard of living. That is one that allows them to meet their basic needs and participate in society at a minimum level.

The data shows it costs between 20% and up to 50% more for various types of household to reach a minimum decent standard of living in London than elsewhere in the country. This is because of additional costs, particularly housing, transport and childcare.

The research is funded by Trust for London, and is the first to look in detail at the minimum additional costs of living in the capital. The research shows that compared to the rest of the UK:

While one in three Londoners overall fall below the Minimum Income Standard (MIS), this varies greatly across groups:

The figures for MIS come from detailed deliberations among people who live in the capital and what they themselves say is needed to lead a decent life. The minimum includes food, shelter and clothing and items such as being able to buy a child’s birthday present or a cheap meal out up to twice a month to maintain friendships and work relationships. By far the biggest costs come from housing, transport and childcare. Since 2008, all these costs have risen sharply in London: social rents by over a third, childcare costs by nearly two-thirds and public transport fares by a quarter. Over the same period, average earnings have risen only 10%.

As well as the higher price of housing, childcare and public transport in London, costs are also influenced by how Londoners live. For example they do not need cars but they do need tubes (not just buses) which are more expensive than public transport elsewhere. Leisure is also differently structured than outside London, and can cost more partly because Londoners tend to have less indoor space so tend to do more things outside the home.

For a single person to reach the Minimum Income Standard in Outer London they would need to earn at least £24,500 a year if they lived in a rented (lowest quartile rent) studio flat (the type of accommodation that Londoner’s thought qualified as a minimum – in the UK MIS this minimum is a 1 bedroom flat) and at least £21,100 if they were sharing. The equivalent for Inner London is £27,100 living in a studio and £22,300 in shared accommodation.

To help ensure more Londoners can reach a decent standard of living a two-pronged approach is needed; on the one hand bringing down costs and on the other, improving incomes through better wages supported by adequate in-work benefits.

Commenting, Matt Padley from the Centre for Research in Social Policy at Loughborough University said:

“This is the first piece of research that has asked Londoners to look in detail at what is needed to lead a decent life.”

“The findings can help policymakers to explore in more depth the impact of particular costs in London. For example, people may say a rent is unaffordable to someone on a particular income but what does that mean? You need to know how much people require, after paying their rent, to afford the other basics of life. This research provides those figures.

Commenting Mubin Haq, Director of Policy and Grants at Trust for London, said:

“For some it costs almost 50% more to reach a decent standard of living in the capital compared to the rest of the country. The very high costs of housing, transport and childcare mean 1 in 3 Londoners are struggling to live a decent life, especially families with children.

“This is not about just food, clothing and having a roof over your head. It’s about the difference between people being able to participate in society or not. It raises important questions about whether London is for everyone or does it become a city for the wealthiest.”

“To help more Londoners reach the minimum we need a two-pronged approach which tackles low incomes, particularly low wages, coupled with policies to bring down the costs of housing, transport and childcare. Action is needed by employers to pay at least the Living Wage and by Government, particularly in relation to affordable housing.”

You can find out if you are below the Minimum Income Standard by using this interactive calculator: http://www.minimumincome.org.uk/london 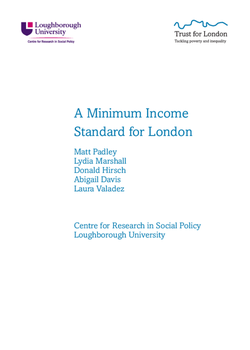 A Minimum Income Standard for London

“... #COVID19 is not an equalising virus, because it has a disproportionate effect on poorer communities & ethnic minorities. So it’s right that we are a central part of London’s outbreak management plan"

CSO would like to thank @CityBridgeTrust @trustforlondon for their continuing faith in supporting us to raise the voice of the Somali Community and Somali-led CVO's.

"Working women have led the fight against #COVID19 but millions of them are stuck in lowpaid & insecure jobs. As we emerge from this crisis we need a reckoning on how we value & reward women's work"

As part of the Funders for Race Equality Alliance, we're looking for a consultant to carry out a mapping of the #RaceEquality sector, in order to get a better understanding of the sector & its players to support it to thrive @EquallyOurs Deadline 26 June, more details below