rise in low-income Londoners facing a cash shortfall since 2016

The analysis found that:

This research was supported by a Trust for London grant. It has been extended for a further eighteen months and will track the impact of Universal Credit as it rolls out across the capital. Future analysis will include a public facing dashboard on the impacts of welfare reform, and analysis as requested by participating authorities.

The analysis is based on data used to pay out over £24bn in Housing Benefit payments each year. Ten of the participating local authorities are using the household-level data to target tailored support to households most in need, and to track the impact of their interventions.

This research shows how wider use of administrative data can help ensure resources are targeted to those that need help the most. Councils can use their data to help with practical problems, making sure struggling families get the help they need as they move onto Universal Credit. We would like to see this type of systematic analysis adopted by government.”

With welfare reform, rising living costs, job insecurity and the roll-out of Universal Credit, it is a time of real change for low income Londoners. The response from policymakers needs to be right if we are to prevent many thousands of people from being pushed into real financial hardship because of the changes. 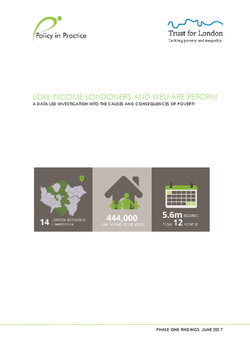 Public consultation on proposals for a better benefits system

The spark for a retrofitting revolution