per hour for the UK and £9.75 per hour in London is the Living Wage standard

employers have signed up to the Living Wage since 2011

Cardiff University report examines impact of Living Wage on organisations. Employer commitment to the voluntary Living Wage is strong, and the experience of most Living Wage employers has been positive, a new study by Cardiff Business School finds.

In their report The Living Wage – Employer Experience, a team from Cardiff University’s Cardiff Business School looked at why and how employers lent their support to the Living Wage, including the reasons for paying, the business benefits, and the positive effects for low-wage workers.

They also examined employer views of the Government’s National Living Wage – a higher statutory minimum wage for those employees aged 25 years or over – and whether its introduction reduces the need for the ‘real’ Living Wage.

The findings from the study show that the desire to act responsibly is one of the driving forces behind becoming an accredited Living Wage employer.

Living Wage accreditation does not appear to have been a disruptive or challenging event to the majority of participating organisations and a number of gains were noted by employers including enhanced brands, differentiation from competitors, and improved corporate reputation.

No evidence of employers recovering the cost of the Living Wage by cutting other employment provisions was found by the research team, and there was little to suggest the Living Wage had a negative impact on investment, employment or prices.

While a substantial proportion of employers admitted that the Living Wage had raised direct and indirect labour costs and had disrupted pay structures, challenges of this kind were limited in scale and seemed to be less significant outcomes than were positive benefits.

The researchers also identified continuing support from employers for the voluntary Living Wage, notwithstanding the introduction of the Government’s statutory National Living Wage in 2016.

“The evidence collected in this study supports the belief that the Living Wage campaign is sustainable and can continue to attract employers to the task of reducing in-work poverty.”

“This research demonstrates to businesses who are able, that going above and beyond statutory minimums brings tangible benefits to an organisation. Just a year ago there was concern that the higher minimum wage rates for over 25s would see a slowdown in businesses accrediting as Living Wage employers. The reality has been sustained growth; doubling the number of accredited businesses from July 2015, with more responsible organisations sharing our vision that a hard day’s work deserves a fair day’s pay.”

Since created in 2011 more than 3,000 employers have signed up to the Living Wage, who collectively employ more than 1.35M people, about 4.3 per cent of total UK employment. It is estimated that about 150,000 employees have received a substantial pay increase as a result.

The Living Wage is a voluntary wage standard, currently set at £8.45 per hour for the UK and 9.75 per hour in London. 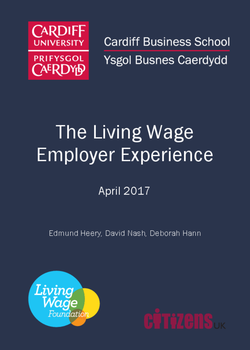