This set of reports are designed to examine the effects of the major economic and political changes in the UK since 2007, particularly their impact on the distribution of wealth, poverty, inequality and social mobility. The analysis includes policies and spending decisions from the last Labour government, including the beginning of the financial crisis.

There are five individual papers covering health, education, children under five, taxes and benefits and neighbourhood renewal. There is also an overview Labour’s Social Policy Record: Policy, Spending and Outcomes: 1997-2010, which can be found here.The main findings show: 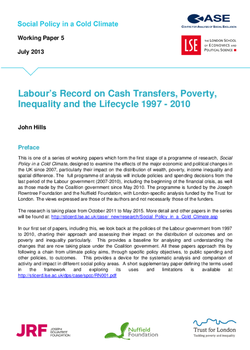