people's services were impacted by the most evident front line service changes.

line services for under-5s and young people have been impacted in all wards (with the exception of under-fives services in Camden) .

reductions were widely reported in these services and were the principal change in most cases.

Researchers at the Centre for Analysis of Social Exclusion, with funding from Trust for London, have examined, through an in-depth case study approach, three London councils’ responses to the cuts, as well as what those responses have meant for services and residents of one of the most deprived wards of each borough.

The research focused on services for families with under-fives, young people 16-24 and older people 65+.

The report is part of the Social Policy in a Cold Climate research programme, jointly funded by Nuffield Foundation, Joseph Rowntree Foundation and Trust for London. 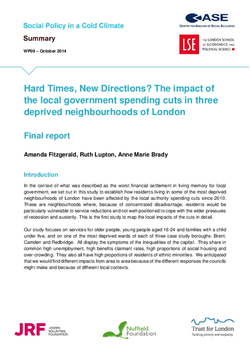 “We need to construct a new narrative; one that reflects the reality of people’s lives...that starts from the premise that all of us have the right to live with dignity & without impoverishment”

This am our CEO @bharatmehta18 will be speaking at the #HousingLearningWork Conference from @LearnWorkUK & @CsthatWork on tackling the employment & earnings gap The session will discuss gov priorities, initiatives to help tenants access work, collaborations with employers & more pic.twitter.com/Hr8vgAg6v8