and holiday pay are being unlawfully withheld

All four candidates for London mayor have promised to name and shame bad employers who do not pay the minimum wage or fail to honour basic rights like holiday pay or maternity leave.

The Employment Legal Advice Network contacted the candidates after a survey showing a rise in bad employers flouting the law. With Employment Tribunals charging up to £1200 to make a claim, many workers cannot afford to use them. Research shows that only half of those who won at employment tribunals received all the money awarded. Cuts in funding to advice agencies mean they are being forced to turn people away.

The Labour, Conservative, Liberal Democrat and Green candidates have all promised to take serious action against bad employers. Including:

‘“We need to get the message across loud and clear that there’s no place in our city for bad employers who don’t pay the minimum wage. Hundreds of thousands of families in London struggle everyday with low pay – we need to expose and take tough action against employers who flout the law.”

“It is simply wrong that in this day and age too many Londoners still have to deal with poor employment practices. By ‘naming and shaming’, and by publicising a register of poor employers a Mayor of London can use their powers to bring these shameful episodes to an end. This should happen immediately.”

“I’m more than happy to sign up to this timely initiative. This government is apparently determined to attack workers’ rights, and the price of making an employment tribunal claim is soaring way out of the reach of the most vulnerable people. That’s why it’s more important than ever that City Hall should take a lead on this. It’s thanks to a Green initiative at the London Assembly that we now have a Living Wage Unit at City Hall to tackle poverty pay in the capital. As a result of that, tens of thousands of Londoners have received pay rises. It makes very good sense to build on that success so that City Hall can help improve workplace practice as well as pay – and send out a strong message that abusive employers won’t be tolerated in this city.”

“If I am elected Mayor I will take action to make sure all Londoners are paid the minimum wage. Those who flout the law should be named and shamed in a public register for all to see.”

“London depends on its millions of workers. We are pleased that the Mayoral candidates take employment so seriously. It is outrageous that employers pay less than the minimum wage or withhold holiday pay. The hotel, catering and cleaning industries often flout the law because they often have the most vulnerable or desperate workers. We have to stop ’phoenix companies’: those who close up owing wages and other debts (including to HMRC) then open under a different name often in the very same premises.”

Manon Bombelli worked as a waitress in the Carmina & Lancelot on Bond Street for a few months, was summarily dismissed, not paid notice, holiday pay, or even her last few weeks of work. An Employment Tribunal ruled in her favour but the employer refused to pay and even taunted by text message, saying that as there was now a new company, so she would never see her money. The restaurant still operates under the same name and on the same premises. She paid the fee for the fast track enforcement of tribunal award scheme but did not recover anything. She has now paid £1,400 to have a judge telling her she was indeed owed her salary and was right to bring in a claim, but received nothing.

Manon is happy to be interviewed. 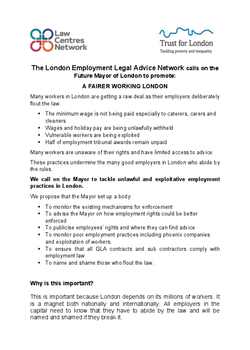 Change in low pay by borough