The government should use savings from the Living Wage to help small firms to pay their staff more, according to a new report.

The report from the Resolution Foundation and IPPR think tanks – part-funded by Trust for London – calls for a series of “Living Wage city deals” which would transfer some of the estimated £2.2 billion annual saving to the Treasury of a UK-wide living wage, to the private sector. The move would release cash to cities or regions where local authorities and businesses come together to increase the number of living wage employers. The Labour Party said that the proposals were an “extremely valuable contribution”, as reported in the Observer.

Companies could use the money to help with the transition to a Living Wage, the level of pay deemed the minimum for a basic but acceptable standard of living and currently set at £8.55 for London and £7.45 outside London.

Cities or regions would have to draw up a plan showing how the money from government would be used to encourage small and medium enterprises to become Living Wage employers. This could include both straightforward financial support, the costs of staff training and expert advice on how to open up more profitable markets in higher-skill, higher-value industries.

Living wage cities could apply to renew their deal if they could show that a target number of companies had begun paying a Living Wage.

The proposal is just one of a series of policy recommendations in the new study, Beyond the Bottom Linewhich also represents the most thorough analysis conducted of the economics of the living wage.

The study also calls on the government to require listed companies to publish a figure for the proportion of their staff paid below the Living Wage and to make it a legal duty if firms do not comply.

This report has been funded as part of Trust for London’s £1 million London Living Wage Special Initiative.

The research also featured in other media including: 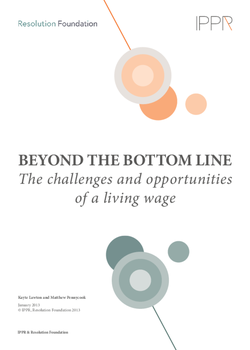