This document gives a snapshot of the work we have funded, or that has come to fruition, since the beginning of 2016.

2016 was a positive year for the Trust; with our endowment growing and it being our 125th year of existence.

Our 125th anniversary was an opportunity to recognise the excellent work done by our predecessors and to reflect on how we have built on their legacy. As part of the celebrations, we held a lively debate in conjunction with the RSA on the issue of inequality. We also chronicled our 125-year history.

A history which includes working with civil society to: set up the first ever Citizens Advice Bureau; found London’s first law centre; and support the pioneering work of William Beveridge, who went on to write the blueprint for the welfare state. This is in addition to helping fund the extension of Hampstead Heath, as part of our programme to protect the ‘lungs of the city’.

The endowment that has enabled us and our predecessors to fund this work, grew by £18 million during the year and totalled £290 million by the end of 2016. This was a strong performance given the financial background. The returns from the endowment enabled us to make 121 grants to groups across London. The Trustees also approved an increase in our level of grant funding for the next three years, giving us an extra £1.2 million per year to support London’s voluntary sector.

2016 also brought some good results from our strategic initiatives, including Moving on Up – designed to help young black men in London into work, and Step Up, which supports the career progression of those in low-paid jobs.

We were heartened by having the work of the Trust recognised when Bharat Mehta, our Chief Executive, was awarded a CBE in the Queen’s birthday honours list.

The year also brought political changes in the form of Brexit and mayoral elections. In the run up to the mayoral vote, we supported a number of the groups we fund to get their voices heard in the debate – together they pushed for change on issues such as inequality, air pollution, employment rights, low pay, housing and strengthening our democracy.

Given that this review is being published in June 2017, I wanted to mention the recent terror attacks in London. Our response to the Westminster and London Bridge incidents has been to help set up and fund the London Emergencies Trust, which provides support to those who have been affected.

2017 is also a time of change for us, as we close some chapters, for example handing over the reins of the successful Strategic Legal Fund for Vulnerable Young Migrants.

It’s also a time to write new chapters, with the launch of a new funding strategy; and trialling new ways of supporting London’s voluntary sector, such as Crowdfunding. This is complemented by additional programmes of work, such as the Citizenship and Integration Initiative. This initiative is a partnership with other funders and the Greater London Authority; it involves experts from community groups being seconded to City Hall to help shape the Mayor’s plans. Together we will work towards the shared goal of making London a more socially integrated city.

Through efforts like these, we strive to stay in tune with the changing opportunities and challenges faced by Londoners and, as always, are committed to improving the lives of those struggling with the impact of poverty and inequality. 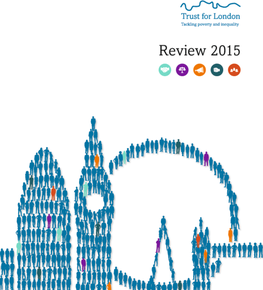