This document gives a snapshot of the work we have funded, or that has come to fruition, since the beginning of 2015.

In 2015 we supported groups trying to address London’s housing problems, those campaigning to improve air quality, and launched initiatives to combat low pay.

In total, we invested £7.3 million in 130 grants to help tackle London’s social issues. We made these grants and directed our funding based on robust evidence. Some of this evidence comes from the on-the-ground expertise of the groups we fund. The rest comes in the form of research we commission, such as our flagship London’s Poverty Profile report, which was updated in 2015. We are able to fund this work because of our endowment, which grew from its 2014 value to reach £272 million.

The year also brought important political changes, with the announcement of the National Living Wage and a decision to rethink cuts to tax credits, which were initially proposed to go along with its introduction.

There were internal changes too, and we were sad to see valuable trustees retire but also grateful for the contributions they made. We were also fortunate enough to welcome some excellent new trustees and staff.

That was then. However, as this report is being published in June 2016, you will be reading it as we are half way into our 125th year of existence. 125 years of working for, and with, Londoners. For over a century we’ve worked with a huge number of civil society groups to do things such as: set up the rst ever Citizens Advice Bureau; set up the rst ever London law centre; support the pioneering work of William Beveridge, who went on to found the welfare state; and we helped fund the extension of Hampstead Heath, as part of our programme to protect the ‘lungs of the city’.

We, and London, are much changed since 1891. However, throughout our 125 years, we have sought to hold true to our values: pioneering new approaches, enabling and empowering communities, listening and learning from those we fund, and working in partnership with others.

June 2016 also means that we have a new Mayor and a newly elected London Assembly. They are important partners and we look forward to working with them, as we did with the previous administration.

In the coming year, we hope to inform the debate on how we can make London an even better city. We will seek to fund work that directly helps to solve some of its most pressing problems.

in our endowment, which grew from its 2014 value to reach £272 million 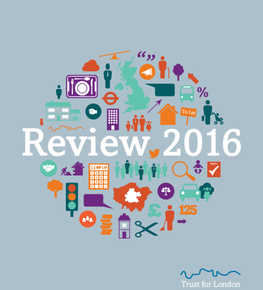