of all school children in London and 44% of the Capital’s workforce are exposed to levels of air pollution that exceed legal and healthy limits.

of the total area of the Capital currently exceeds the legal limit for NO2.

Nearly a quarter of all school children in London are exposed to illegal and harmful levels of air pollution.

Nearly 25% of all school children in London and 44% of the Capital’s workforce are exposed to levels of air pollution that exceed legal and healthy limits.

A new report, Up in the Air, by leading think tank Policy Exchange and King’s College London, analyses data from over 100 air quality monitoring sites across London. It shows the most polluted parts of the Capital currently have levels of Nitrogen Dioxide (NO2) nearly four times the legal limit. The research finds that 12.5% of the total area of the Capital currently exceeds the legal limit for NO2, and that deprived parts of London are more likely to be affected.

The report highlights some startling numbers:

The report says that while many good initiatives have been put in place to combat poor air quality in the Capital, London’s air pollution problem is still far from being solved.

It puts the failure to control NO2 emissions down to the growth in the number of diesel vehicles, including buses, taxis and diesel cars.

– Diesel cars have systematically failed to match up to emissions standards due to illegal and legal cheating of emissions tests.

– The ongoing growth in decentralised energy across London could also pose a threat to air quality. Gas combustion in buildings could be responsible for 48% of NOx emissions by 2025 in Central London.

New analysis reveals that if improvements in NO2 levels are delivered in full by 2025, then this could lead to an improvement in life expectancy of around six months. However this is in doubt given the slow progress on NO2 pollution to date.

“The case for tackling air pollution in London is clear. London’s air is unhealthy to breathe.” “Children are particularly vulnerable to unsafe levels of air pollution. Our research highlights that nearly a quarter of all children in London attend schools which are exposed to illegal and unhealthy air pollution.” “The Government and City Hall are responding to the challenge, but our analysis highlights how much further we need to go to improve the level of air quality in London.” 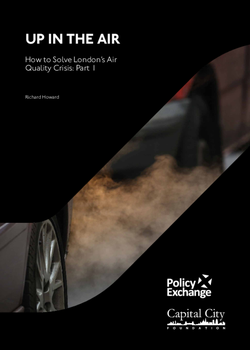 Involving Young Londoners: A review of participatory approaches in the youth sector