people are contained within this area, as well as 979 schools attended by a quarter of London’s school population

To mark the publication of a new report on air pollution in London, Richard Howard, Policy Exchange’s Head of Environment and Energy, sets out a ten-point plan to solve London’s air pollution crisis.

London is facing an air pollution crisis. Our recent report Up in the Air: Part 1 documented the fact that more than 12% of London’s total area exceeded legal and healthy limits for nitrogen dioxide (NO2) in 2010.

This area contained a workplace population of 3.8 million people, as well as 979 schools attended by a quarter of London’s school population. It is estimated that if air pollution stays at current levels, it would reduce the average life expectancy across all Londoners born in 2010 by up to 2 years. Poorer parts of London are disproportionately affected. The European Court of Justice has ruled that the UK must put in place a plan to achieve air quality standards in the “shortest time possible”. In short, there is a legal and moral imperative to improve London’s air quality, and more needs to be done about it.

Today marks the publication of a new report, Up in the Air: Part 2 by Policy Exchange and King’s College London, which proposes a comprehensive package of measures to reduce emissions and improve air quality in London. It focuses on two main sectors – road transport and gas combustion – which together are responsible for the vast majority of pollution in London. Our policy recommendations seek to deliver air quality improvements as soon as possible, whilst at the same time avoiding penalising people and businesses, and giving sufficient time to adapt.

Air pollution is the most important environmental issue to Londoners, and is becoming a key election issue as the Mayoral race gathers pace. Polling released earlier this week suggests that London parents see air pollution as the biggest health risk to Londoners, with 68% of parents saying they are worried about their children breathing in dirty air.

We call on all of the Mayoral candidates to support our ten point plan to clean up London’s air (details of our proposals are provided in our report). 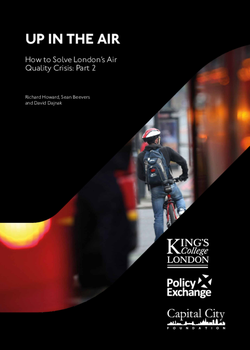 Why London’s Poverty Profile is needed now more than ever

“... #COVID19 is not an equalising virus, because it has a disproportionate effect on poorer communities & ethnic minorities. So it’s right that we are a central part of London’s outbreak management plan"

CSO would like to thank @CityBridgeTrust @trustforlondon for their continuing faith in supporting us to raise the voice of the Somali Community and Somali-led CVO's.

"Working women have led the fight against #COVID19 but millions of them are stuck in lowpaid & insecure jobs. As we emerge from this crisis we need a reckoning on how we value & reward women's work"

As part of the Funders for Race Equality Alliance, we're looking for a consultant to carry out a mapping of the #RaceEquality sector, in order to get a better understanding of the sector & its players to support it to thrive @EquallyOurs Deadline 26 June, more details below